I can’t believe that it’s already 4th January — time seems to have flown since Christmas! I was so exhausted when I was finally on holiday that we’ve had a fairly quiet (but wonderful) Christmas. Mr. Bsag and I spent Christmas Day and Boxing Day together (eating and drinking too much, as is pretty much the law at Christmas), then I travelled to my parents for a couple of days while Mr. Bsag took care of the cats. We’ve had some lazy times and some great walks, and I’ve also been listening to the great albums I got among my Christmas presents.

This was a present from Mr. Bsag, and I love it more each time I listen to it. It’s a mixture of covers of modern songs and versions of old folk ballads, but they all sit alongside one another very comfortably. I like all the tracks, but I think my favourites have to be an incredibly powerful version of Joy Division’s ‘Love Will Tear Us Apart’, and ‘The Leaves of Life’, as well as the mournful ‘The Hills of Shiloh’. ‘Love Will Tear Us Apart’ is such an iconic song that it must have taken a bit of courage to cover it, but they bring forward the lyrics by making it into a slow and deceptively simple duet between June Tabor and John Jones. There are some superb musicians on this album, and June Tabor’s voice is as pure and deep as ever.

Gillian Welch - The Harrow and the The Harvest

Perhaps it’s a personal failing, but I really like sad, mournful songs. I’m generally a very cheerful optimistic person, so I think I need to season it with a bit of melancholy in musical form just to balance things out and to make life taste sweeter. Maybe that’s why I love Gillian Welch so much. The song ‘Revelator’ (from the album Time (The Revelator)) ranks as one of my all time favourite songs (rubbing shoulders with many of Kate Bush’s), and I think this album is also destined to be a classic.

There is hardly an upbeat, optimistic track on the album, but I find the whole thing completely beautiful. David Rawlings’ guitar playing, and the way that Welch and Rawlings’ voices mingle and harmonise so thrillingly makes this an incredible album. Again, it’s hard to pick out just one or two tracks, but I could listen all day to ‘The Way It Will Be’, ‘Tennessee’ and ‘Hard Times’. This album is really worth a listen, particularly if the current financial and political situation makes you feel like listening to music evoking The Great Depression1.

Yes, I know, I already bought this album when it came out as a download. However, I was so bowled over by it that asked my brother if he could get me the vinyl version for Christmas. I’m glad I did, as it gets even more delicate, layered and spacious when you hear it on vinyl. I suppose that I shouldn’t be surprised than an MP3 file (even the relatively high bitrate files you get from the iTunes Store) sounds rather compressed when compared to the analogue version, but I was slightly startled. I was also rather pleased that I can still tell the difference so easily.

I’ve already sung the praises (at great length) of the album in my previous review, so I’ll just add that the attention that a double vinyl album forces you to pay to the music (by making you get up three times to turn the disc over) adds even more to the experience. However, Bella dislikes vinyl. You see, when I sit on the sofa downstairs, she almost immediately settles down on my lap, and she was not amused at me turfing her off every 20 minutes or so to attend to the disc.

Before I finish, I’ll mention one more thing (which has nothing to do with music). Mr. Bsag and I had a lovely walk in the sunshine on Monday, out to a country pub that we both enjoy. As we walked down a lane, I could see something flapping in a tree by the side of the road. 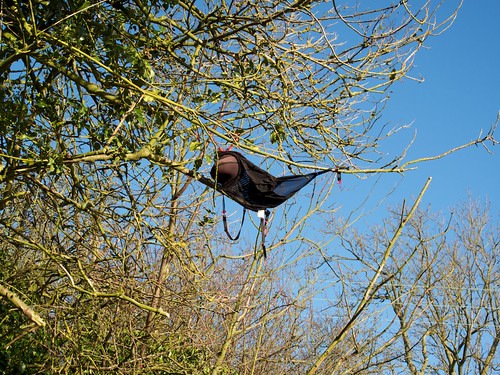 It made me smile and really piqued my curiosity. There just has to be an interesting story behind the deposition of an item of lingerie in a tree by a quiet country lane, doesn’t there?