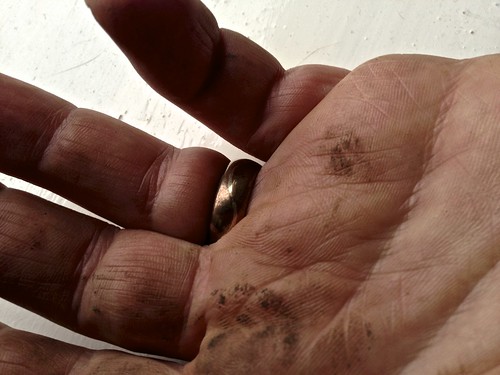 I can’t quite believe what happened today.

Remember when Mr Bsag lost his wedding ring? If you don’t, do go and read that post then come back — it’s not a long one. I’ll wait here until you’re back.

Well, I can’t quite believe it, but he found the ring again. It didn’t turn up — as I rather fondly imagined that it might — in the middle of a potato that we’d harvested from the allotment, but it was almost as amazing. Nearly 5 years to the day he lost it, he was up at the allotment as usual doing a bit of late winter tidying up, when he spotted it just sitting there on the surface, on top of some wood chippings he had laid on the path.

He’s been all over that allotment in the past 5 years and hasn’t seen it (nor did he when he spread the chippings), so I can only assume that it must have been buried and was gradually brought to the surface by the smaller particles of soil falling through cracks and lifting the larger particles. That ring must have had some adventures. As you can see in the picture above, it’s a bit grubby1, but you can still see the wavy thread of yellow gold in the rose gold band that we chose to symbolise a strand of DNA in each of our rings. Looking at it now, 12.5 years since we put the rings on at our wedding and 5 years since Mr Bsag’s had its little adventure in the soil, it strikes me that the wavy line also symbolises the ups and downs of married life. Things are hard sometimes — life is hard. But you try your best and you wait, and eventually things come back up again to the air and the light, sometimes against all your intuition that they will.

It can take years, and the movement is so slight you can believe that nothing is happening at all. But it’s as inevitable as the coming of Spring.