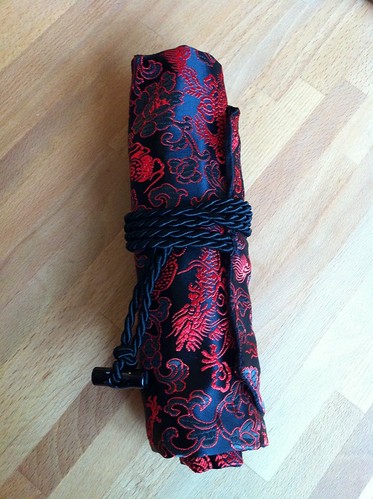 A few weeks ago, my fellow Twitter fountain pen-aholics and I were ogling the Enveloop: a lovely canvas and suede pen wrap which looked ideal for keeping each pen separated and safe, but easily accessible. Until now, I have been using a small black Muji pencil case, which had one separate zipped pocket on the outside, in which I kept my beloved Lamy 2000 fountain pen. However, since then, I’ve acquired (somehow — my hand slipped on the ‘Buy’ button!) a couple of other fountain pens, and I was beginning to worry about them knocking about with all my other pens in the main compartment. I looked around on the web, and found that there are various designs of pen wraps out there. It seemed to be something I could probably have a go at making myself. Since this weekend was a Bank Holiday in the UK, I decided I would buy some fabric, pull out the old Singer 99, and have a go at making one.

I must say that I had a really fun afternoon making this wrap. I should really try to do something creative with my hands more often, as I found it really satisfying. I’m very pleased with the result which you can see above (the inside is on show here). It was all done in a rather ad hoc way. I made a paper template to cut out the main pieces for the liner and the outside material, amazing myself with how inept I am at creating shapes with right angles, and — indeed — using scissors to cut a straight line. After that, I decided that I might was well wing it, and cut out the pieces for the pen pockets and flaps as I went, (mis-) judging by eye. The seams are a bit wonky in places if you look closely, and the whole thing is not entirely square, but I’m rather proud of it. There are 5 main pen slots, covered by a flap when it’s closed, and there are two further small pockets in the left edge for my Kaweco and various other bits like an eraser and pencil lead container. I was after an Asian look for the wrap, and found some lovely dragon-patterned viscose material in the market for the outer, which I paired with a fake suede material to give a soft lining. A bit of braided cord with a plastic toggle button on the end wraps around to close it.

I might still add a few features, but it’s usable as it is. I’ll see if I need to add any velcro to close the vertical pockets at the left edge, and I might also add an external slip pocket on the right edge to keep one pen handy, like the original Enveloop. However, I tend to tuck my Lamy 2000 into the pen loops of my notebook when I’m out and about, so I’m not sure if I really need an external slot. I feel a bit like a kid again, going ‘back to school’ tomorrow with my new pencil case!