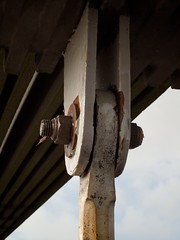 We were in Bristol this weekend, for a wedding (the one I had to go clothes shopping for). The wedding celebration itself was great fun, so we had a lovely time on Saturday evening. However, because of travelling problems, we arrived later than we'd expected, and had to leave at lunchtime on the Sunday. This was a shame, because I was looking forward to wandering around one of my favourite cities. As we arrived, I was trying to remember how all the streets interlinked, and found that I didn't instantly recognise parts of the area I spent a year living in. Then I worked out that it is over 20 years since I was an undergraduate in Bristol. Gulp.

I slept really badly on Saturday night for a number of reasons, waking at 4.30 am and lying awake listening to the hotel's extractor fans rumble. I was particularly annoyed because the clocks had gone back an hour that night, so not only had I missed out on sleep, I'd missed out on the 'bonus' hour you get at the end of British Summer Time.

A morning walk in the bright, cold air of Clifton on Sunday morning cheered me up, though. Old Brunel built some pretty spectacular constructions, but I have an abiding and deep love for the Clifton Suspension Bridge. I never get tired of the elegant shape, or the way it responds to and emphasises the natural beauty and drama of the Avon Gorge. I love every gigantic nut and bolt of it. I've put a small selection of the photos I took in a set on Flickr (the whole collection would bore even the most ardent Brunel fan). I'm only sorry that we didn't get to see how it looks at night, now that they've replaced the old lighting with a new LED system. It does sound as if it would nicely accentuate the features of the bridge, while giving the impression that it is floating above the Gorge. However, I'm nostalgic about the warm, slightly random fairy light effect that the old tungsten bulb system used to have.