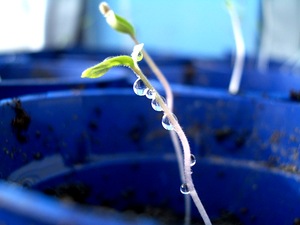 It's that time of year again, when a not too old girl's thoughts turn to sowing seeds. We saved quite a bit of our seed from last year (chocolate peppers, peas, cherokee beans), but we also went a bit mad with the Real Seed Catalogue to try out some new things. So we've got two types of pea (yellow mangetout and traditional podded peas), two types of beans, three varieties of tomato (I know, but I love tomatoes) and some rainbow chillies amongst over delights.

Peppers and tomatoes need to be started fairly early to get enough of a growing season with our so-called summers, so I sowed a load of tomatoes, chocolate peppers and chillies last week, filling our airing cupboard with pots. The tomatoes have already germinated, as you can see from the picture, and I get a real thrill from looking at them gamely stretching towards the light on our bedroom window sill.

It was our first time growing from seed last year, but I'm addicted to it now. The sense of satisfaction when you (eventually) eat the vegetables that started off as a seed in some compost in your airing cupboard is immense, and even better if you saved the seed from your crop last year. It also feels like a promise that summer will eventually arrive.

We've been really pleased with the Real Seed Company's seeds. The germination is superb (I've had a nearly 100% germination rate with the tomatoes), and the vegetables are easy to grow and -- more importantly -- delicious! I noticed that they were featured in the Guardian Weekend magazine yesterday, which is great -- they deserve the publicity^1^.

Perhaps the most telling sign of our total conversion to the world of vegetable cultivation is the fact that we found ourselves buying seed potatoes last weekend. We didn't plant any last year because we don't eat a huge quantity of potatoes (we eat fairly equal quantities of potatoes, rice, pasta, couscous and so on), and we felt that we'd rather concentrate on crops which are either much nicer when you get them really fresh (e.g. peas), or much cheaper to grow than buy in the shops (e.g. rocket). But such is the mysterious and irresistible pull of the potato to the allotment holder, that we didn't manage to hold out against the spuds this year. An allotment just isn't an allotment without a row or two of spuds. Which is why our conservatory is currently home to a couple of trays of chitting potatoes.

^1^ I have no affiliation with them -- I'm just a satisfied customer. ↑