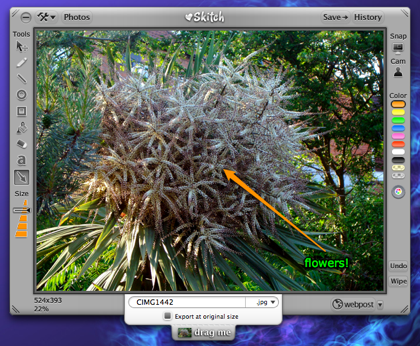 I was lucky enough to get an invitation to the Skitch beta (thanks to Matt Lyon and Alex Payne on Twitter!), and I've been having some fun trying it out. Skitch is a kind of image/snapshot/sketch creation application, which also makes it easy to share those snaps with others. That makes it sound complicated, but it really isn't. In fact, Skitch is a blast to use, and I keep finding myself dragging photos in, making screenshots, and scribbling on my pictures, just for the hell of it.

It is designed in an unusual, highly visual and intuitive way. Almost all of the tools and functions can be discovered just by playing with the interface. You can drag images in to the frame (or select them from your iPhoto library), click on a pencil tool to draw a scribble, then move it around on top of the underlying image. Resizing the image is done by grabbing the frame and resizing it, which gives you a visual feel for the size, without having to guess how big 500 pixels wide is. You can take a screenshot of the entire screen, a selection (with some nifty crosshairs for accurate selection of an area), or a window. As a nice touch, when you are snapping a window, you can set a white or transparent background (with or without drop shadow), or you can set your desktop background as the window background. To clarify this, even if your selected window is sitting on top of a messy pile of other windows, the screenshot will show it sitting on a clean desktop background.

The sharing options are quite extensive and equally easy to use. You can use the provided space on the Skitch servers, Flickr, .Mac, or upload to FTP, SFTP or WebDav file space. When you've finished with your sketch, you select where you want it to go via the drop down at the bottom right of the window, then hit the 'webpost' button. This tells you that the image is uploading, and when it has finished, the button changes to allow you to click it to copy the URL (or a chunk of HTML) for inclusion in a blog or forum post.

Your 'Skitches' are automatically saved to a Skitch folder inside your Pictures folder, but you can also access all your saved or uploaded images via the history feature. It's a simple thing, but having images automatically saved to a particular folder (but being able to find them again easily via the interface of the application) removes another barrier by giving you one less decision to make.

Skitch is one of those applications that you didn't know you needed, but become indispensible very quickly. Many of the individual features are replicated in other applications -- I have Snapz Pro for screenshots, various image editors for drawing and reszing images, and Transmit for getting images on to a server -- but Skitch brings all of those features together into a single, very easy to use package. It has limitations and simplifications, but that's part of the point: it exists to let you make and share screenshots and other annotated images as quickly possible, while being fun to use.

It seems that I have two invitations to give out for the beta, so if you'd like to try Skitch, let me know your email address.