This past week, I finally finished a sewing project that has taken a long time, but which will hopefully be just the start of new sewing adventures: I finished making a shirt from a self-drafted pattern. Apologies for the terrible quality of the photos below. The light has been terrible for photography today! The moulage and sloper

When I made my Hobbit trousers, I talked about starting to draft a bodice, using Suzy Furrer’s excellent classes. It’s a more lengthy process than drafting trousers, because there are two main stages involved with the bodice itself, and then you need to draft sleeves, a collar and so on. The first step is to draft a moulage, which is a very fitted, skin-tight garment which is intended as a kind of blueprint for the shape of your torso and hips. The process of actually drafting the moulage from your measurements is a satisfying mixture composed of about 90% geometry and 10% artistic license. You start by building a series of boxes which are the width of the widest measurement on your body, and replicate the vertical distance between the measurements. Then, using a mixture of your own measurements, some ‘standard’ measurements which work well as rules of thumb on most people, you draw triangles, squares and curves to build up the basic shape, darts and seamlines.

For my first attempt, this all went swimmingly until I got to drafting the curve of the armhole (or armscye, as it is called). I could see straight away that the vertical distance between the shoulder and bottom of the armhole was much too short to allow me to draft something that would look like a normal armscye. I suspect that most people get to a stage like this at some point, because the rules of thumb simply can’t work perfectly for everyone. I had to think through how to alter some of the other measurements in order to get it to work. I decided that the measurements I was mostly likely to have taken inaccurately were the shoulder (hard to measure on yourself) and the side length, so I shortened both. This then let me draft a normal-looking armhole.

Version 1.0 of the moulage was a surprisingly good fit, but shortening the side length had resulted in the waist sitting too far above my natural waist. The bustline was also too high1, so I re-drafted the relevant portions and tried again. The second was pretty near to perfect, though the bust apex was still too high. I decided to move on anyway to the second part, which was drafting a sloper, which is the actual working template from which you start to make individual patterns. The sloper is simpler and has quite a bit of ease added, so that it is not skin tight, but just reasonably closely fitted. I changed the bust apex in the process of doing this, and the muslin of my sloper worked out pretty well. The final major stage was to draft a sleeve sloper, which was a lot easier than I had anticipated, and fitted first time on the test bodice, without needing to make any changes.

In the process of doing all this, I learned about another of my ‘non-standard’ figure quirks (to add to the already lengthy list): forward shoulders. My shoulders naturally tilt forwards, not as a result of poor posture – I’m just built that way. This is why I had a hard time drafting the armholes. Most patterns assume that the measurement of the back armhole will be longer than the front, but my forward shoulders mean that my measurements are the other way around. Added to that, I have quite narrow shoulders, so the resulting sloper (that fits me well) looks a little odd.

I’d had a lot of fun drafting, but by this point I was really eager to make a garment that I could actually wear. Back in the summer, I had bought some cheap but rather lovely tropical-style printed cotton in red and white from a stall in the Rag Market in Birmingham. My immediate thought when I bought it was to turn it into a relaxed, short-sleeved Hawaiian-style shirt. However, after doing all the drafting, I decided that I liked the rather perverse idea of making a very traditionally tailored long-sleeved shirt from this fabric, adding left-over scraps of another red print for contrast on the inner yoke, collar, placket and under collar. This despite the fact that I have never made a shirt before, and thus never tackled making a collar, cuffs or sleeve placket, let alone drafting one. Oh, and I decided to clean finish it, meaning that all the seams would be flat-felled, so that the raw edges are all enclosed inside the seams, and the shirt looks as good from the inside as the outside. Needless to say, I have never flat-felled a seam in my life.

First, I had to draft the body of the shirt itself from the sloper (including a button placket), draft a sleeve pattern to accommodate a cuff from the sleeve sloper, and also draft a collar and collar stand. Luckily, one of Suzy’s Craftsy classes came to the rescue, and I managed to accomplish all of those following her directions. For the bodice front of the shirt, I added a little more ease (though I wanted it to still be quite fitted), and transferred the volume taken up in the shoulder and side dart into a French dart. On the back, I cut the waist darts into princess seams, and also drafted a yoke to form the top part of the back. I also curved the hem front and back so that the shirt could be worn tucked in or out.

I decided as a backup plan (but also to have instructions on hand on how to actually sew a shirt) to buy the Sewaholic Granville shirt pattern, which is a pattern I had been admiring anyway. The instructions are very clear, and I could also compare my drafted collar, cuffs and so on against the PDF pattern pieces to make sure that mine were at least reasonably close to being correct. I only used one actual pattern piece from the Granville pattern: the tower sleeve placket, which is a bit of a mind-bending piece of origami to draft. The pattern instructions were invaluable, especially for the placket. As I get more practice sewing, I’m gradually developing the ability to look at a pattern piece, read the instructions, and be able to simulate in my mind how it will be transformed by sewing, turning out and so on. However, the tower placket was beyond me. Still, I followed Tasia’s excellent instructions, and suddenly, there it was – a functioning sleeve placket! Sewing the yoke is also an exciting moment. There’s an inner and outer yoke that attach to the bottom of the shirt back and the shoulders, and the goal is to get all the raw seams enclosed. In order to accomplish this, you use the ‘burrito’ technique. It’s difficult to describe, but you sew both yokes first to the shirt bottom, enclosing the shirt piece between the two yokes. Then you pin the shirt fronts to the outer yoke at the shoulder seams, and sew the seam to hold it. Once that is done, you roll up the shirt front and back pieces like a burrito, then flip the inner yoke around the bottom (enclosing the inner shirt pieces), so that you can pin the right sides of the shoulder seam together. At this stage it looks like the photo below. This is where you begin to think that you have just irretrievably tangled everything up, but once you tease out the inner shirt pieces through the neck hole and give it a shake – ta da! – all the seams are neatly enclosed, and you have a functioning yoke. It’s magic. 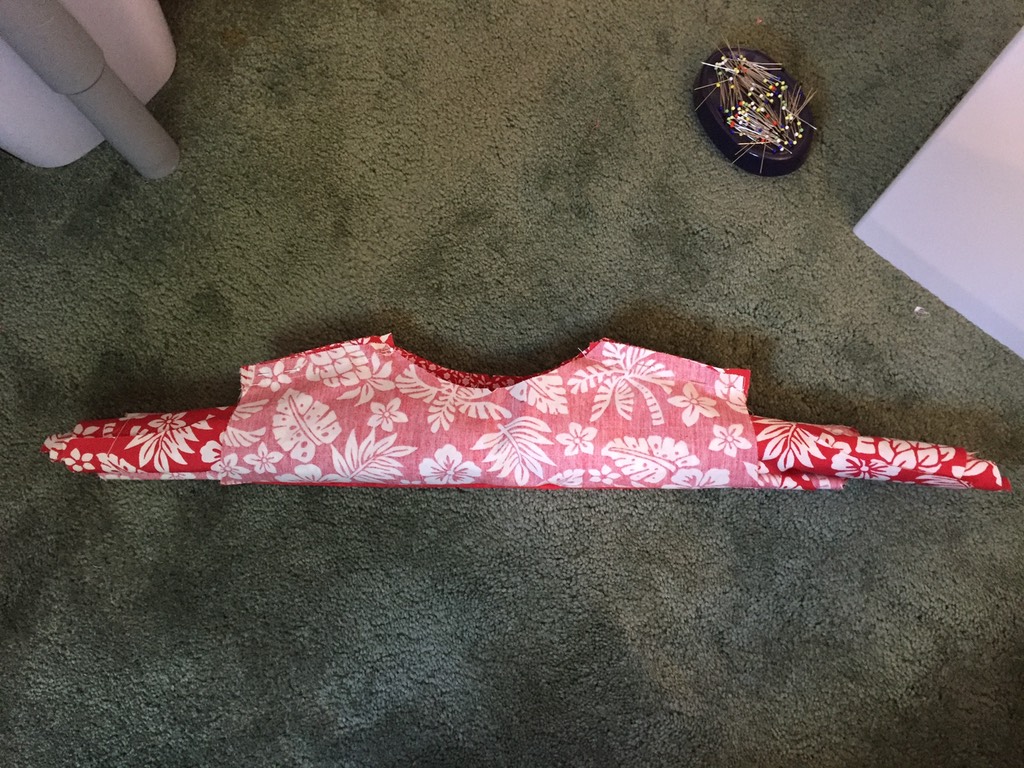 I did have to alter the sewing order from the Granville instructions a bit, as I was doing flat-felled seams, and so needed to insert the sleeves in the flat, and then sew the sleeve and side seam in one go. This was by far the trickiest part of the whole shirt, as it turned out that my sleeve had a higher cap than is really advisable to use if you are inserting in the flat and flat-felling. Consequently the armhole seams (particularly at the back) are rather puckered and wonky. It doesn’t affect the fit or comfort, and it isn’t all that visible either, thanks to the busy print, but it’s something I’ll have to fix before making another shirt. Everything else turned out amazingly well, which I’m going to put down to beginner’s luck. 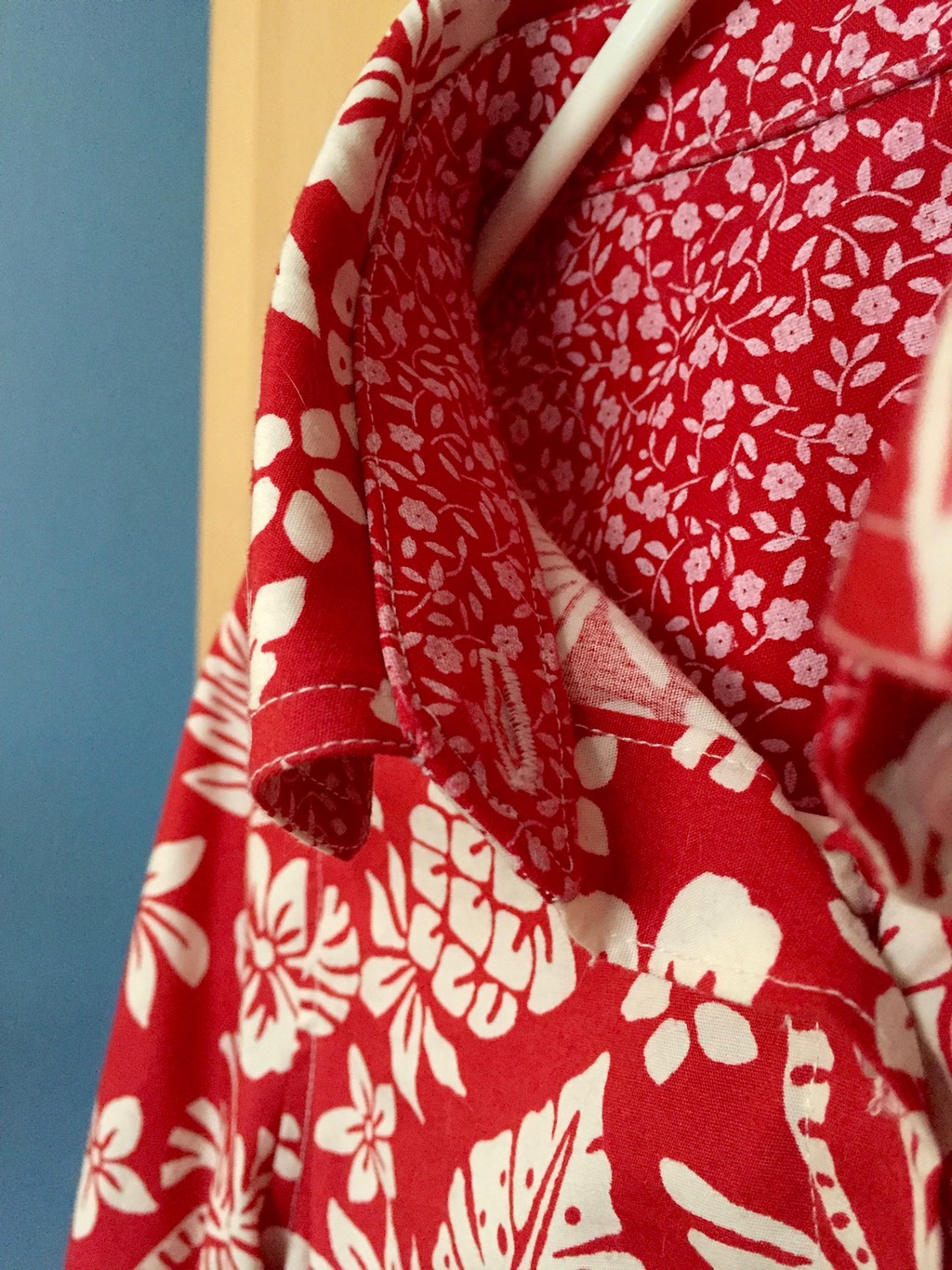 I’m really happy with my shirt. It fits so much better than any shirt I’ve ever bought, because it is narrow enough over the shoulders, but then big enough over the bust and hips (while still coming in to skim the waist in a flattering way). And the sleeves are not too long! I don’t think I’ve ever bought a shirt that I didn’t have to turn up at the cuffs. Even something as seemingly trivial as being able to place the buttons where you choose makes a big difference to the look of the garment. On a fitted shirt, you need to place a button precisely at the bust apex, as that is where the shirt front will gape when you stretch your arms back. Of course, bought shirts rarely have the button at the point that you need it, and you therefore have to live with the possibility that one over-enthusiastic stretch2 will result in the button ricocheting off the nearest person.

When I make the next shirt, there are relatively few alterations I would make to the fit. Ironically, I would lengthen the sleeves a tiny bit, because such was my joy at the prospect of having properly fitting sleeves, that I went a little too far in the opposite direction. In cotton, the amount of ease is fine, but I think if I was making it in a finer, more drapey fabric, I would probably add a bit more ease. Otherwise, the only other change I need to make relates to construction: I need to flatten the sleeve cap so that I can flat-fell the seam easily. I might need to test that out in muslin first to make sure that I don’t end up with a sleeve that is too tight over the shoulder. However, for now, I have a shirt I really like that fits me well, and that cheers me up in these dark, windy, rainy days of autumn. I’ve also discovered that I really like the precise sewing, edge-stitching and top-stitching needed for sewing shirts. I think I’ll be making several more when I find some nice fabric.

Zen and the Art of Sewing

If it isn’t already abundantly clear from the way I’m constantly banging on about it, I’m really loving sewing. I love thinking through the physical problems involved, and doing things with my hands that rely on learning to feel the right way to do something. Flat-felling seams is a perfect example of that. You can read tutorials on how to do it, and that sets you going in the right direction, but you learn by actually doing it, and feeling with your fingers when you’ve turned the fabric under the correct amount, and when you’re applying the correct amount of tension. I love the creativity, and I’m still pinching myself that it’s possible for me to actually make a shirt from scratch, to my own individual measurements, just starting with a flat bit of cloth and some paper, a pencil and a ruler.