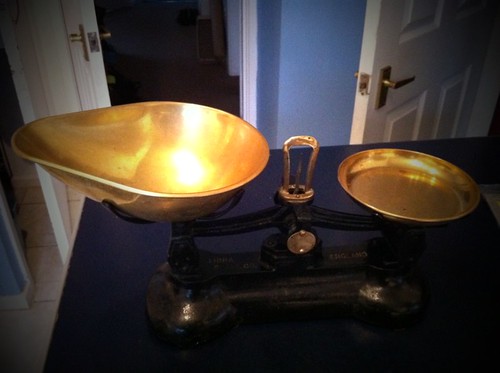 Sometimes the old things are the best things. I had a set of electronic kitchen scales, which served me well for many years. They weren’t fancy, but they worked and did the basics: you could weigh in metric or imperial, and you could tare the scales so that you could adjust for the weight of a bowl or some existing ingredients. I don’t even remember what make or model they were, and they were made of a cheap looking plastic, but they lasted for a good 15 years or so.

Recently, those scales broke, and there was no chance of getting them fixed, so I got a set made by Terraillon. They looked fairly sturdy, and were somewhat flexible because you could either use the provided bowl for measuring ingredients, weigh directly on the platform, or use your own bowl. They lasted about 3 weeks before malfunctioning. They had a 10 year guarantee, so we took them back to the shop and got a set of Salter scales instead. These were simpler (and cheaper), and were similar to my original set. They came with a 15 year guarantee and malfunctioned after a month. It seems that the weighing platform was not securely supported by the rest of the body, and it ended up sloping down on one side. We knew from testing it with packets of food of known weight that it was wildly innaccurate, and not even consistently innaccurate at that. Back to the shop they went for replacement.

By this time, I was thoroughly cheesed off with the poor quality of kitchen scales available. Perhaps I’ve just been unlucky and ended up with rare lemons, but both manufacturers are reputable ones, and both units were guaranteed for long periods, so I expected them to last more than a couple of months. I remembered that my Mum had a set of old cast iron scales: the kind which have a balance beam with a tray holding brass weights on one end and a pan for the ingredients to weigh on the other. It turned out that it was just sitting in the loft gathering dust, so she was very happy for me to rehome it.

After a bit of a clean-up to remove dust and grime from its sojourn in the loft, and after polishing up the brass components (which I rather enjoyed), they have pride of place on the kitchen worktop. They do take up more space than the electronic scales, but they are quite attractive in a solidly Victorian way. More importantly, there is nothing to go wrong with them. You can see that it is properly calibrated when the beam is balanced without any weights in the pan. If by some chance it became miscalibrated, we could always add a small weight to one side to balance it again. Weighing things is a very satisfying process because it is all so transparent. You feel the weight of the brass weights you are using when you place them on the tray, and you can see the balance pointer moving gradually to the centre point as you add ingredients. I’m hoping that I might get better at estimating weights as I use it, because after repeatedly handling 100g or 200g, I’ll get a sense for what that feels like. The scales are made of cast iron and brass, and you could probably drop them out the window without damage (to the scales — your patio would suffer). I like that.

We’ve kept the replacement set of Salter scales just in case (they might be useful for weighing letters and small parcels), but the cast iron scales are the ones we’re actually using.