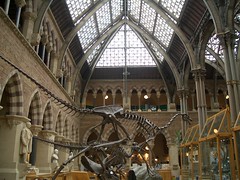 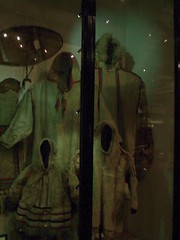 The Pitt Rivers is an anthropological and ethnographical collection of artefacts, many of which were collected by the founder, General Pitt Rivers. The museum is kept deliberately dim^1^ to protect the delicate artefacts, but that just serves to make it more mysterious and exciting. Instead of grouping objects by geographical region, collections of similar objects from around the world are kept together. Pitt Rivers had a surprisingly modern outlook on culture, and was interested was in the way that similar ideas tend crop up in different places around the world. At a time when many people in the West were obsessed with the so-called 'primitive ways' and odd customs of tribal groups, that must have been unusual. There is, for example, a whole (large) cabinet devoted to bull-roarers (shaped, sound-making pieces of wood tied to a length of twisted rope or string), from many different countries. It seems a truth universally acknowledged that a human in possession of a brain must be in want of an object to whirl around their head, with which to make a roaring sound. 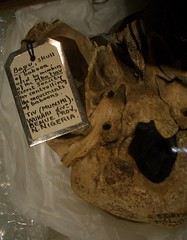 Another lovely feature of the museum is the drawers. Most of the cabinets have many drawers underneath them, each containing yet more artefacts. You're allowed to open the drawers to look, and you really never quite know what you're going to find. You can spend hours just opening drawer after drawer of weird stuff, and wondering at the variety and strangeness of human culture. Most objects still have their original, neatly hand-written labels, which are often the only indication you have of the identity or purpose of the object. I loved the label on this baboon skull, which was supposed to be used for controlling the movements of baboons by a secret society set up for that purpose (the label is clearer on the large version if you click through). Well, someone has to, I suppose, otherwise there would be baboons all over the place. I also really liked a love charm figure "made from putty and rosebuds" from Devon in the UK. I think we've all been made into putty and rosebuds by a love affair at some time or another. 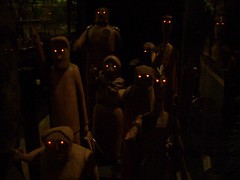 You can't talk about Pitt Rivers without mentioning the shrunken heads. If you're ever in the museum and can't find them, just follow the sound of kids squealing in a disgusted/delighted fashion. Kids love 'em, along with the human skulls with horns attached or sharp sticks poked through the eye sockets. In fact, the museum is great for children. The staff are very friendly towards kids, and the air of mystery and discovery (plus the weird shrunken heads, of course) is some kind of treasure trove for them. As I left, one of the curators was asking a couple of little girls whether they would like to follow some clues to find six wooden mice hidden around the museum, and they were practically exploding with excitement at the prospect.

^1^ Which is why my photographs are so rubbish. That's my story, and I'm sticking to it. ↑