Disclaimer: this pen was sent to me free of charge by Pen Chalet in exchange for my review of the pen on this site. However, the opinions expressed in this review are entirely my own.

If you watch documentaries where the presenters examine original historical documents, there’s often a moment when you find yourself marvelling at the beautiful handwriting of the document’s author. I’m thinking particularly of documents from the 19th Century which are often written in an immaculate copperplate hand. This gorgeous calligraphic technique uses a fine and flexible nib, varying the width of the line by applying pressure to spread the tines of the nib, rather than by changing the angle of a broad italic nib, as in other forms of calligraphy. It always astounds me that people were able to produce such intricate and beautifully regular letter forms, while presumably under a great deal of pressure to get the document written and not take all day about it.

I have therefore been curious about flexible nib pens for a while, and in particular the relatively cheap flexible nib pens in Noodler’s range. However, Noodler’s pens can be difficult to get hold of in the UK. So when Ron Manwaring of Pen Chalet emailed me to ask if I would be interested in reviewing one of their pens, I opted for the Noodler’s Konrad.

The Konrad a very reasonably priced pen ($40) with (in this model - the Dixie Rebellion Red Ripple) an ebonite body and feed. Ebonite is an interesting material traditionally used in pen-making, and is produced from rubber through a vulcanisation process. It is quite similar to bakelite in feel: smooth and solid, and it warms nicely in the hand. The colour of ebonite is apparently somewhat variable, and the barrel of this pen is what I would call a rich red-brown rather than red. The swirls remind me a bit of the crema on an espresso, which is fine by me1. The pen is also a piston filler, which is my favourite filling mechanism, and holds an enormous volume of ink. However, the most interesting thing about the pen is the flexible nib, of which more later.

Out of the box (and even when filled with what seems like litres2 of ink), the Konrad is a lightweight pen, posted or un-posted. It weighs 18 g filled, and measures 14 cm capped, 13.5 cm un-posted and 15.75 cm posted. I find it very comfortable to write with either posted or un-posted, but I usually write with it un-posted given my tiny Hobbit hands. The piston knob at the end is covered by a blind cap which you must unscrew and remove before filling. Initially, I found the piston mechanism extremely stiff. It’s possible that the rubber sealing rings had adhered slightly to the inside of the barrel in transit, but after freeing the piston gently and filling with water then emptying, it moves smoothly and I have had no further trouble with it. You need to submerge the nib and feed fully in the ink, but then the pen slurps up ink easily. There’s a transparent portion of the barrel closest to the section, so you can see it filling with ink, and also see when you need to refill. Given the enormous capacity of the Konrad, that is likely to take a long time unless you are writing all day with the pen. Unlike my Lamy 2000, you can also dismantle the piston by rotating the piston knob fully anti-clockwise, which means that you can easily flush out the pen between filling with different inks, and also means that you can potentially replace the rubber sealing rings if necessary. Noodler’s state in the information that comes with the pen that you can find suitable rings in plumbing shops, which is reassuring for the life of the pen, provided that UK sizing for tap ‘o-rings’ is the same as those used in US faucets!

Out of the box, the nib is smooth but provides some feedback on the page. I have encountered no problems with starting the flow of ink, or with skipping. In the instructions that come with the pen, it mentions that if you write with the pen for extended periods, the heat from your hand can cause excess air in the barrel to expand, which may impede the flow of ink. The fix for this — advancing the piston slightly to expel the air with the nib pointing upwards — is something that I have routinely done after filling pens for a while now, which is perhaps why I haven’t yet encountered this problem with the Konrad. It’s possible that it would only manifest itself after prolonged periods of uninterrupted writing. The same instructions also mention that you can adjust the feed to give a wetter flow, but this — along with smoothing the nib to your own preference, which can be done with any pen — isn’t something I’ve ever tried. In this review, I’m therefore writing about the experience without adjustment, straight out of the box, as I imagine this is the way that most people would use it. However, if you are interested in trying nib adjustments, the low price of the Konrad, and the fact that you can take it apart easily, means that it would be a great pen with which to experiment. 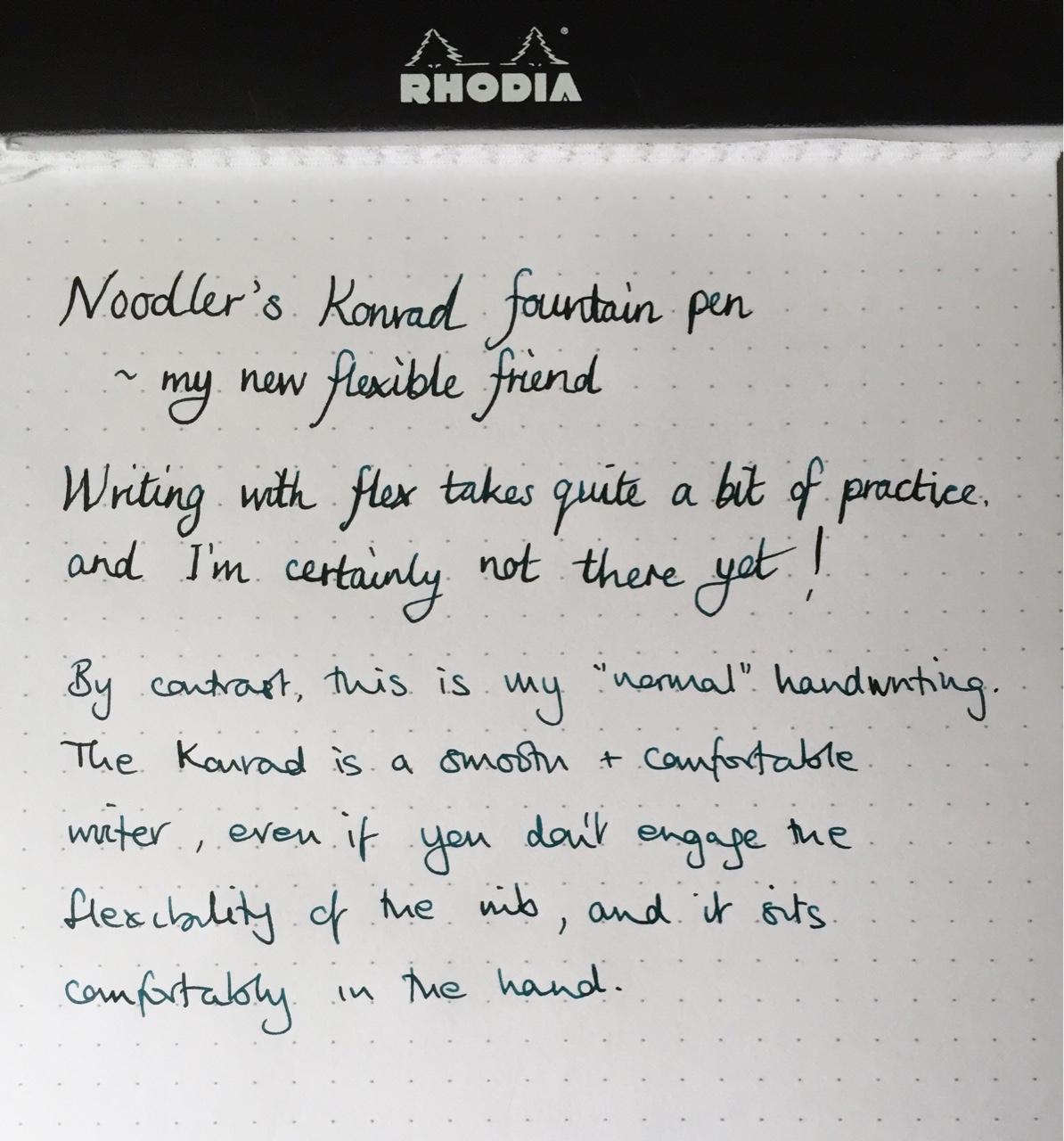 The flexible nib is interesting. It’s stainless steel and fairly firm, so you need to apply a reasonable amount of pressure to get the tines to spread. I had to look up some guidance on how to write with a flex pen, because I was a bit nervous of damaging the tines. The key, it seems, is to hold the pen with the nib placed on the paper so that both tines make even contact with the paper. If you want to try copperplate-like writing, you can slant the page (rather than the pen) to get gracefully inclined letters3. To get changes in line width, you then need to pull back towards yourself with your index finger, rather than pressing the nib into the paper, which is what you are tempted to do. You then apply the pressure only on the down-strokes. As you can see from the sample of my writing above, I most definitely have not got the hang of this. You have to slow down and try to write fluidly, which I have found quite difficult. It’s fun though, and I am starting to get a bit of variety in line width. I could probably spread the tines further without problems (the steel means that they snap back in position very readily), but I’m trying to get the effect consistent before I go mad with it. Even without employing the flexibility of the nib, it’s a very enjoyable pen to use, and I have found myself wanting to pull it out for notes quite often.

The build quality seems to be excellent for such a reasonably priced pen. The pen caps firmly, the piston doesn’t wobble as you operate it, and it generally feels solid and durable, with all the parts fitting together firmly. In terms of looks and tactile quality, I much prefer my beloved Lamy 2000, but then the Konrad is substantially cheaper than the Lamy! I have read reports of flow problems with these pens, but either I was lucky with the unit I received, or Noodler’s have improved their quality control, because mine has written well from the start, and is ready to write every time I uncap it. The other issue I read about is the unique smell of the ebonite. Some people find it unpleasant and overwhelming, but I really like it. It’s a difficult smell to describe: there’s obviously a note of rubber but it’s a warmer smell than that, without the sulphurous whiff of rubber. To me, it smells a bit like artist’s oil paints and ink mixed together. Personally, I like the smell so much that I periodically sniff the pen, but — as they say — your mileage may vary.

Overall, I think this pen is great fun, and excellent value for money, particularly if you are interested in trying out a flexible nib pen, or if you like a nib with a little more feedback. It could be a great everyday workhorse that can go for long periods without needing to be refilled, but which you can dismantle and clean out easily when you want to switch inks. I think if you wanted a very smooth, wet nib out of the box, and weren’t interested in line variation, I would recommend the TWSBI Mini or Diamond 580 instead, as they have smoother, wetter nibs out of the box, and (to my taste at least) are slightly more aesthetically pleasing, while also being good value for money (about $10 more than the Konrad). However, the Noodler’s Konrad is a unique and fascinating pen, and it’s well worth a try. If it was a choice between the competent but rather bland Lamy Safari, and the dashing and quirky Konrad, I think I’d choose the Konrad every time. I’m going to continue practising flexing the nib, in the hope that I might eventually end up with a beautiful copperplate hand that any Victorian clerk would be proud of. That could take some time.

Many thanks to Pen Chalet for sending me the pen.