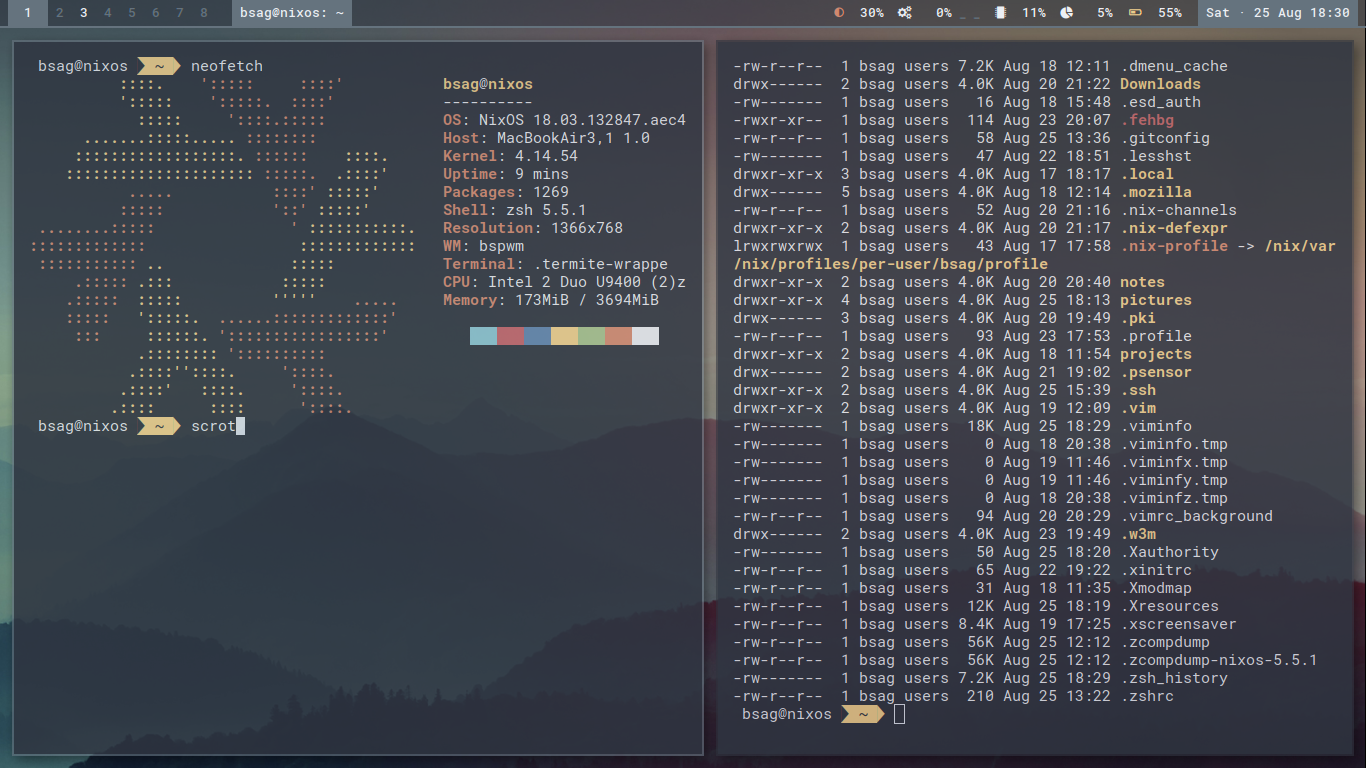 You know how it is when you take a quick look at a framework for organising your dotfiles, and end up installing and configuring a new Linux operating system on an old MacBook Air? No? Just me then.

It started innocuously enough. I’ve been really busy at work all summer, with lots of travelling, a lot of working weekends, and long hours. That hasn’t really left enough blocks of time for sewing projects, so I’ve been falling back on my other relaxation activity: pottering about with computers in odd moments. I had seen NixOS before, but came across it again because it acts as a package manager and also potentially a way of managing your configuration files.

Home Manager, which uses the Nix package manager component to both install and configure applications on your system, is intriguing. All of the Nix elements use the Nix language, which is a purely functional language. This means that you can set up your configuration to be completely declarative, defining which applications you will install (what version, which plugins you will use and so on), as well as your own personal configuration files (like the contents of your .zshrc), all in one file. Then when you execute that file, your system is set to the state you have declared in your configuration, with no broken dependencies. This raises the interesting possibility of being able to bootstrap an entire system easily from scratch, once you have got the configuration right.

Home Manager is built on Nix (the package manager), which in turn is a component of NixOS, the Linux operating system. You can install Nix on a variety of platforms (including macOS), but the operating system provides a self-contained Linux-based system. Since I was finding it a bit difficult to figure out how Home Manager worked without knowing about Nix, I decided to install the package manager on my Mac.

Once you’ve got it installed, it works in a very similar way to other package managers like Homebrew. You issue a command to install a particular bit of software, and it does so. The interesting part is that it stores all the installed software in a /nix/store directory, with links so that the system can find binaries, libraries and so on. Even better, you can safely install multiple versions of the same software without getting in a mess, uninstall software and its particular dependencies cleanly, and you can even roll back the system to a previous state if you mess something up. There’s also a nix-shell tool, which enables you to specify a particular set of packages inside a project directory. So you could set up a coding project with a particular version of Python, a set of pip packages and so on, all of which is activated when you move into that directory, but none of which affects (or is affected by) whatever else you have installed on the system. Neat. That may sound very like Python’s virtual environments, or Ruby’s Bundle system, but it is language-independent, so you could handle all your project dependencies that way, irrespective of the actual tools used.

The more I read about Nix, the more interesting it became, and I got the crazy idea that I could try installing NixOS. The operating system has an even closer tie to the Nix ecosystem, as you might expect, so you can configure your whole operating system (hardware, software, everything) from a couple of configuration files, and then reproduce that completely reliably. It has the same rollback feature, so again, if you mess something up, you can just revert back to the last version and try again. I started off installing NixOS on my Mac via Virtualbox, and set up a basic system. It worked so smoothly, that I got the confidence to install it on an 8 year old MacBook Air that I had sitting around and not doing much. And so it begins…

Installing any version of Linux on a Mac is always a little bit of an adventure. However, I knew from this guide written by Bernerd Schaefer that it was possible. I ended up diverging from that guide though. The main difficulty I encountered was with partitioning and formatting the drive correctly. I could boot from the NixOS installation image that I put on a USB stick, and also generate the hardware.nix and configuration.nix files with the nixos-generate-config command, but then it would fail to boot with errors reported in hardware.nix.

I abandoned the idea of using a LUKS encrypted volume for simplicity, and did a lot of searching before I found the source of the problem. Essentially, if you format a single partition in macOS with a GUID partition table (called GPT in Linux), it creates a hybrid GPT/MBR partition table (apparently to allow dual booting with older versions of Windows). What you need to do once you boot from the NixOS installation stick is use fdisk to delete the main partition (leaving the EFI boot partition alone), and create a new one, formatting it as Linux filesystem. Then you should have the correct EFI boot setup, which is GPT with protected MBR. I have only the haziest idea what that all means, but that was what did the trick. Then I was able to use fdisk again to create the following partitions (where /dev/sda is my internal SSD):

That should do the trick. If you generate the Nix config again, you should see that hardware.nix has captured your filesystem correctly, and it should boot without problems. Once I got to this stage, everything was much easier. When you have rebooted, you can start editing configuration.nix to add the packages you want, and even define users declaratively (you can see my configuration.nix here). 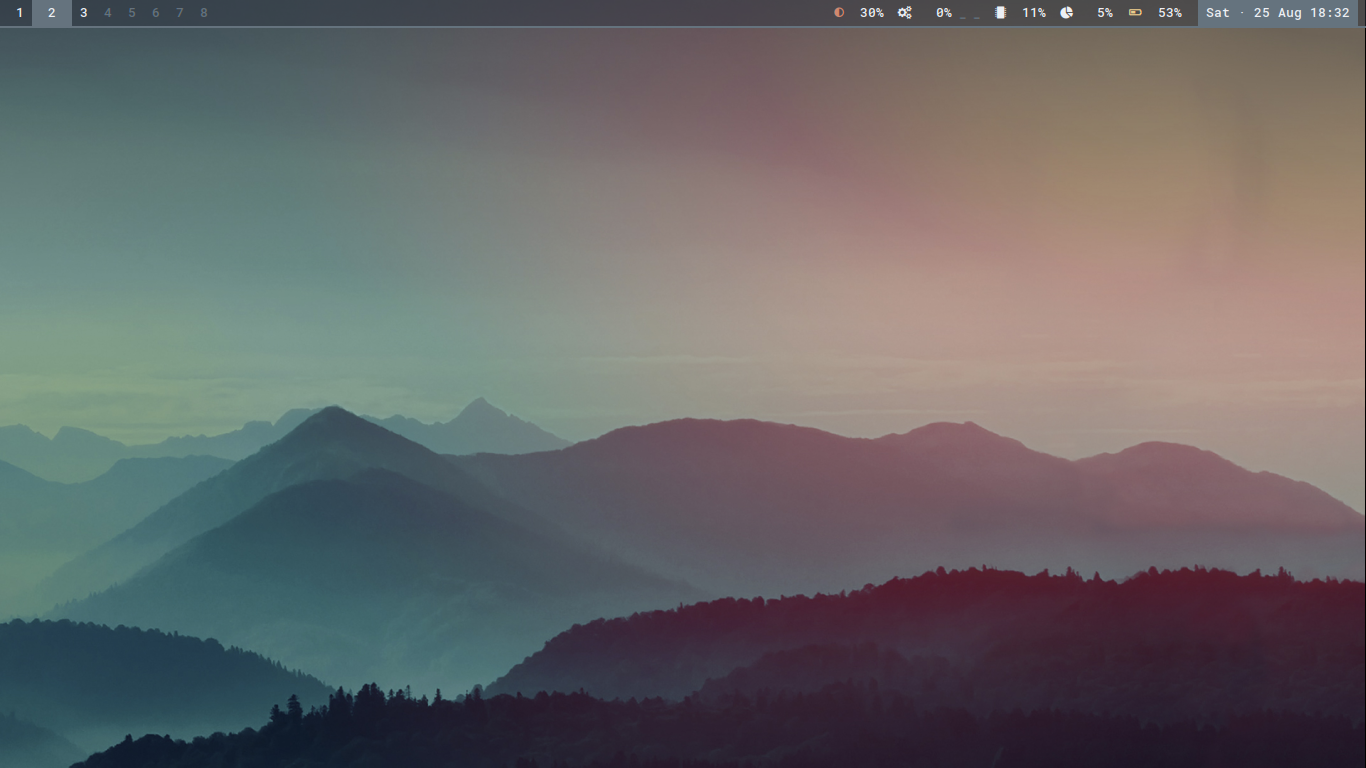 I have been very interested in minimal, tiling window managers for a while, so I started with a configuration developed by Brihadeesh here, using Bastien Dejean’s bspwm as the window manager, with sxhkd as a hotkey manager. When Brihadeesh posted his setup on Reddit, he used a wallpaper by AidenDrew that I fell in love with, so I use that too. It goes very nicely with the Nord colour scheme that I’m fond of. I use the Compton compositor to give windows transparency and shadow, and Rofi to launch applications and switch windows. I must say that a tiling window manager is great on such a small screen, and really makes the best use of the screen real estate. It’s also a nicely consistent system, both visually (I can use the Nord colourscheme pretty much everywhere), and in terms of keyboard commands (everything uses Vim-inspired keys). 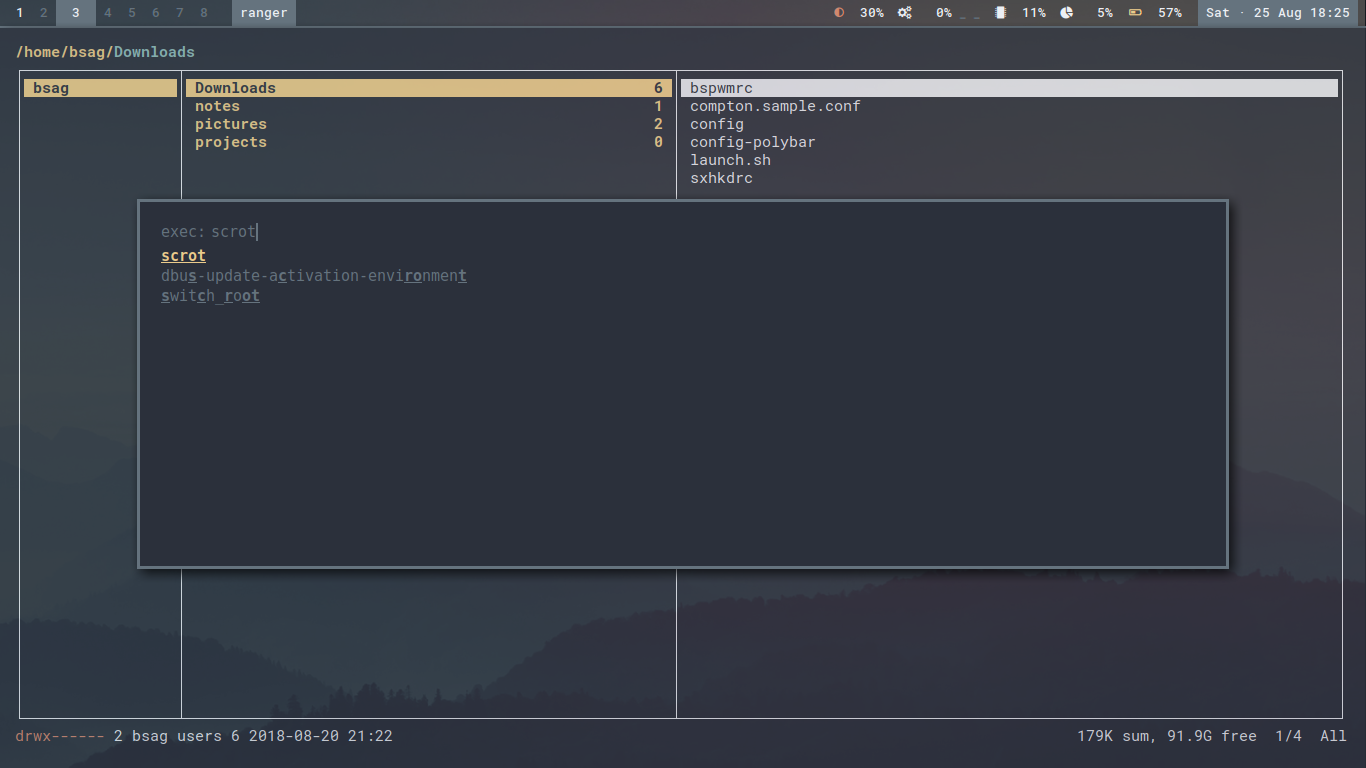 Most of the other packages I have installed are similarly minimal or commandline only. I use Ranger as a file manager, the glorious Zathura PDF viewer, and along the way I discovered Qutebrowser. Qutebrowser is fantastic, with embedded Vim-inspired hotkeys for moving around tabs, history and even clicking links, all from the keyboard. It also has a very minimal UI, which works very well with a tiling window manager, and makes the most of the tiny 11" MacBook Air screen. As far as the hardware goes, I’ve got the trackpad working properly, and I can use screen brightness and volume keys to change those settings. I also discovered (more internet searching) that the package tlp offers much improved power management, so the Air is running much cooler now and gets around 4 hours of battery life, which isn’t bad considering it is 8 years old and the battery is not in the best condition. I’m really pleased with this meander into Linux World. I haven’t finished yet, though. I’ve realised that I probably do need to use Home Manager to make it easier to manage all the dotfiles and other configuration files alongside the main system configuration, which brings me right back where I started. Hakuna matata.

I’m really impressed with NixOS. It certainly isn’t the easiest Linux to install, and you have to do a lot of searching around outside the manual to find some of the answers you need, but it is a very robust and sleek system. Despite the fact that I made no end of errors, I never ended up in a situation that I could not recover from. When you edit configuration.nix and use it to rebuild the system, the compiler picks up on syntax errors so you can fix them before trying again. And if the worst does happen and the compiler misses some critical thing resulting in a broken system, you can reboot, and use the boot menu to pick the previous working generation of your system. That makes it a fun and worry-free system to experiment with and learn about building a system. I’m keen to see if I can use Home Manager on my Mac to replace Homebrew and build a system with which I can bootstrap a new installation to my liking.