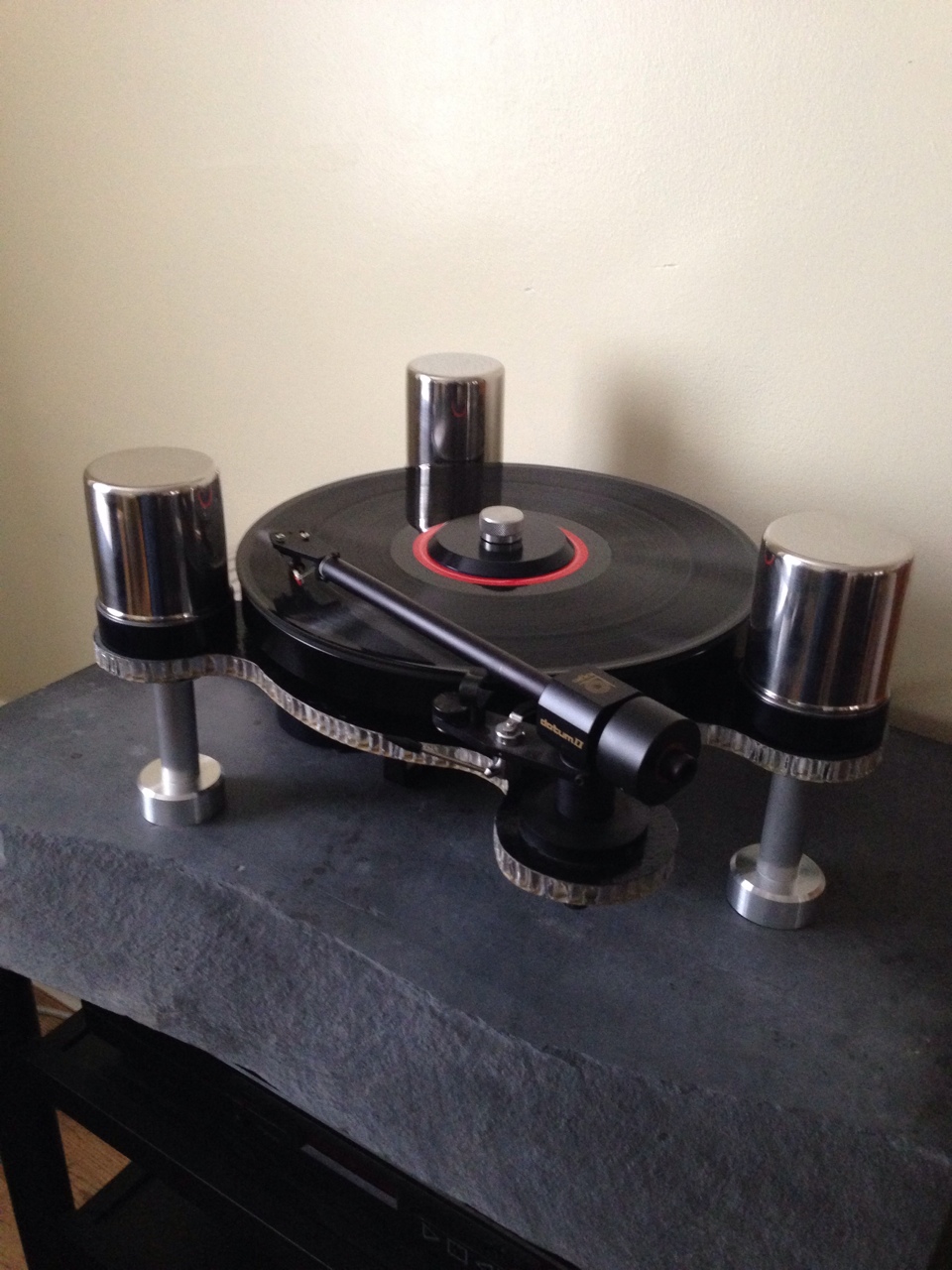 Last weekend my brother brought me a wonderful turntable. It was one that he had made himself about 15 years ago. Since it was now surplus to requirements, he asked if I would like to use it. I’ve mentioned before that I tend to do very well out of the equipment upgrades of my audiophile father and brother. In fact, my previous two turntables were also cast-offs: the first a Project 1.2 belonging to my brother1, and the second an AR turntable that previously belonged to my Dad. This, however, was something special.

It’s not the only turntable my brother has made, and he has got pretty good at it. The tonearm and the platter are difficult to make without specialist tools, so he starts by buying an old second-hand turntable (perhaps with a broken motor) and using the platter and arm. This one has a nice Logic Datum II arm. He then builds the rest himself, including the power supply, motor housing and the platform to suspend the platter. This turntable starts with a massive chunk of slate for a base, which was made to sit on top of a particular equipment rack, which — handily — I also had as a hand-me-down from my Dad. The three stainless steel legs that support the platform of the turntable are bolted through the slate slab for stability. The platform itself is made from aerolam, which is a kind of aluminium honeycomb structure, and extremely rigid. You can’t really see it from the images above, but the surface of the aerolam is a gorgeous, deep midnight blue that goes very well with the slate and the motor housing. I love the way that the cut edges of the aerolam show you the honeycomb structure inside.

The aerolam platform is then suspended on the steel posts with springs, which are hidden underneath those steel cylinders (which are actually cappuccino cocoa shakers). This isolates the tonearm and platter from any vibration in the room, and works extremely well in combination with the massive slate base. It has a separate motor housing which sits underneath the platter and drives the traditional rubber band2 to turn the platter. This in turn is connected to the outboard power supply (the steel box with the big red button in the photo) to isolate the electrics from the signal path as much as possible.

I have to say that I’m very glad my brother was there to set it up. It came separated into scores of separate, tiny components. When he made it, he didn’t write down any instructions for assembly, so there were a few difficult moments when he was trying to remember just how the heck it all went together and why (oh why) he made it so complicated in the first place. I can report that watching an engineer try to remember how to put together something he built 15 years ago is an exciting and entertaining spectator sport.

The next task was setting up the stylus cartridge. We initially decided to use the cartridge that had last been used with this turntable, as it was (in theory) a better one than I had bought to use with the AR turntable. Now, aligning cartridges is not my favourite activity, as I find it difficult and fiddly. My brother dislikes it too, and it didn’t help that we had a rather basic alignment protractor with which to set it up3. Eventually, he got it set up properly, and the wonderful moment came when we could put a disc on to listen how it sounded.

It sounded dreadful: it was muddy, blurred and overly sibilant. He immediately suspected the cartridge, so he swapped it out (going through the tedious alignment dance again) for my own Ortofon OM10. This was infinitely better. It seems that the old cartridge must have become de-magnetised, or the elastic suspension in the cartridge had gone.

I’ve listened a lot to the turntable this week, and it keeps getting better and better as it settles in on its bearings and suspension. Since the other hifi components (and the cartridge) are the same as before, the improvement must be due to my brother’s excellent turntable construction. It is beautifully stable and detailed, and extremely quiet in the silent parts of each disc. With the excellent sound quality and the unique and (to me) beautiful appearance of the deck, I feel incredibly lucky to have this turntable. The only slight worry is that it is in no way cat-proof. Bianca used to use the AR turntable as a stepping stone on the way to the mantelpiece, as it had a perspex cover. The suspension on this one is certainly not designed to support a 3 kg cat, much less withstand about 9 kg of force caused by a 3 kg cat jumping on it. At the moment, I am covering it with a cloth to keep the dust off, and that unstable surface seems (for the moment) to be dissuading Bianca from trying to climb on it. However, I think I need to get something made as a cover eventually to protect it more thoroughly.