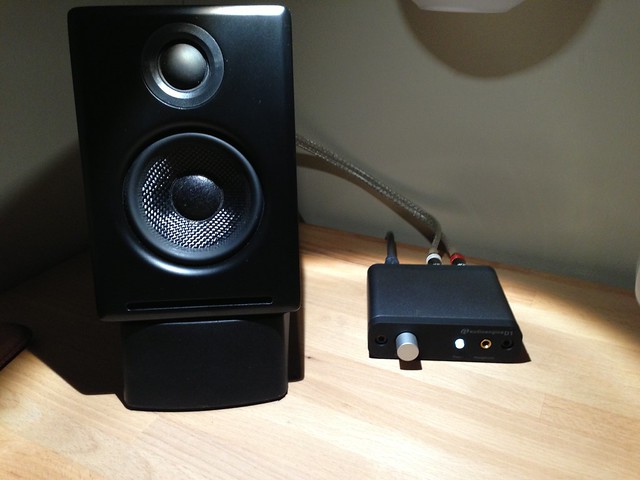 I’ve been pondering for a while how best to handle my digital collection of music. I have a lot of CDs and a small but growing collection of vinyl, but I also have a lot of music in digital format. Some of this has come from buying music through the iTunes or Amazon stores, but most is from my CDs that I have ripped, or from Apple Lossless format downloads from my Society of Sound membership. This is all stored on a Mac mini in the living room that has done sterling work as a media centre1 for several years. However, one of the perennial problems has been how to share this collection of music with other devices without having to download, sync or manage it in complicated ways.

I do have a couple of Squeezebox devices (a Boom in the bedroom, and a second-hand Classic that was in my office until recently), and these help a great deal. The Squeezebox server software reads the iTunes library and then allows you to play items in the library through the players located throughout the house. This works extremely well, but I’m worried that at some point this system is going to break because Logitech (who bought Squeezebox, neé SlimDevices) have recently announced that they are no longer supporting it. They only make one product now, and the impression is that they have no interest in supporting the products any more. The devices themselves will probably continue to function of course, but the problem is that the system depends on the Squeezebox server. It still works on Mountain Lion at the moment (albeit as a legacy 32-bit Preference pane), but I worry that the next software update will break the server. I think in the longer term I will have to think about something that is better supported, like a Sonos system, but I will be very sorry to leave behind my Squeezebox hardware. It works well and I’m fond of it.

Anyway, Squeezeboxes don’t solve the other part of the puzzle, which is playing my collection on other devices and computers. When Apple introduced Home Sharing a while ago, I thought that might do the trick. However, it required you to download music from your main collection on to other computers which isn’t what I wanted to do: I wanted to be able to stream my music to the iMac in my office, and to be able to fill my iPhone with a selection of tracks without having to download them to my computer first, or to sync my iPhone with the Mac mini in the living room. So I spent a few years using a work around in which I mounted the iTunes folder of my Mac mini over the network on my iMac, and then set up my local copy of iTunes to use that folder. That still meant that I had to manually manage syncing tracks on to my iPhone, which was a bit of a chore.

When iTunes Match came out I was tentatively excited because it seemed that it might solve the my problem. It took me a while to get around to setting it up, but I have now done so and am pretty impressed by it. For those of you who don’t know how it works, the idea is that you pay a fairly modest yearly fee in exchange for having access to your entire music collection anywhere (provided you have internet access). Once you have set it up, your iTunes library is scanned and matched with music already available in the iTunes Store. If it’s already in the catalogue, it does not need to be uploaded, but you get access to a copy already in the cloud, encoded at 256Kbs even if your copy was lower quality. Music that is not available on the iTunes store (like my Society of Sound albums) is uploaded and converted to 256Kbs AAC files, while the originals remain untouched2. Once this process is complete (mine took a few days), you can then connect your computers and iPhones to iTunes Match to have access to the entire collection. You can either stream the music without downloading it, or you can choose to download what you want if you know that you may be without internet access.

This has worked really well for me so far. I love the fact that I can listen to anything from my collection — on a whim — on my iPhone, and I have found the streaming to be pretty robust. It also means that my copy of iTunes on my iMac gets automatically updated with any music that I add to the main iTunes library on the Mac mini without me having to intervene. Even better, the meta-data in the iTunes library (play counts, date last played, rating and so on) is now actually useful to me, because it gets updated however I chose to play the music, and if I set a rating on my iPhone, that gets properly synced back to the master library.

As a result of iTunes actually being useful to me now, I decided to swap around my audio equipment a bit. I had used my Squeezebox Classic connected to a pair of Audioengine A2 speakers (pictured above) to listen to music in my office. That worked well, but I really wanted to move the Squeezebox down into the living room so that I could connect it to the high quality speakers and amp in my main hifi system. I have been really impressed by my little Audioengine speakers, so I decided to get their D1 DAC so that I could play music directly from iTunes on my iMac, while greatly improving the sound. The D1 is really tiny but well made, and connects to the computer via USB, which conveniently provides power as well as sound input. It then connects via standard phono cables to the speakers (the A2 are active speakers, and so need no amplifier). There’s a volume knob on the front, which saves me blindly fumbling behind the speaker for the volume control there (the only flaw with the A2s in my opinion), and you can turn the unit off and on using the tiny, lit button on the front. This handily also switches the iMac’s input between the built in speakers and the DAC. Finally, there’s a headphone socket for those times when Mr. Bsag is in the next room getting irritated by my choice of music. Plugging in headphones cuts the output to the speakers automatically.

I’ve been really impressed with the sound quality from the D1/A2 combination. It certainly compares very favourably with the Squeezebox/A2 pairing, even though the D1 is probably not quite fully ‘run in’ yet3. The soundstage is really clear and detailed, and the music is rich but well-defined with a wide variety of styles of music. I suppose that I should be suprised that it makes such a difference using an outboard DAC rather than the rather sub-par soundcard built in to most computers, but it does amaze me that such a tiny box can produce such wonderful sound.

Consequently I’ve been having a great time this weekend listening to all sorts of music and controlling it using a combination of Alfred’s built-in iTunes controller (which I prefer for finding and playing selections) and CoverSutra (which I prefer for the ‘now playing’ bezel and artwork display).

To stream or not to stream?

Before I took the iTunes Match plunge, I had been thinking about subscribing to a streaming service. Both Spotify and Rdio offer pretty good streaming services, and both have mobile clients so that you can access music on your iPhone or iPad too. I have had a free Spotify account for a while, but don’t use it much because of the annoyance of the adverts. I had a trial of Rdio, and was generally impressed by the breadth of their catalogue and by the clean interface of the player which I found much nicer than the Spotify player. However, I had rather mixed feelings about relying on a streaming service like this. It’s great to be able to find and play pretty much any piece of music at a moment’s notice4, but I worry about how little money actually reaches the artists when you ‘pay’ for music this way. Also, I tend to research my music purchases fairly carefully, and they then become firm favourites that I listen to repeatedly over many years. I therefore like to own the music, sometimes in multiple formats: if I really like an album, I’ll get a download for convenience and a copy on vinyl for listening to it properly.

I wouldn’t rule out possibly using one of these services in the future, but for now I think that the combination of buying individual albums (either as downloads or as CDs that I then rip) and using iTunes Match to make them available everywhere probably works better for my mode of music listening.