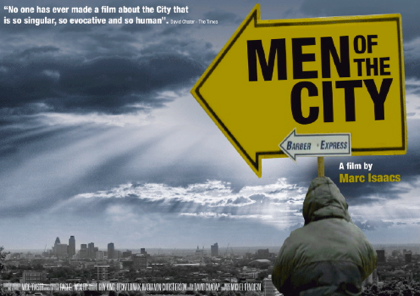 A busy month has meant that we've built up a backlog of recorded TV, so we've only just watched a Storyville documentary by Marc Isaacs, called Men of the City. I've always really enjoyed documentaries which sit back, observe and mostly let people speak for themselves, rather than asking questions, and Men of the City did just that. It's a real gem of a film.

Very simply, the film follows the lives of four men who work in the City of London: a hedge fund manager; a street sweeper; a man who holds a sign pointing to the nearest Subway sandwich shop; and a man who collects money on behalf of City clients. It's an incredibly beautiful, humane film. The photography is stunning (a downpour in London has never looked so beautiful), the music (by Michel Duvoisin) is lovely, but it's the portrait of the men which really holds your attention.

When you think of bankers and City money men and the recession, it's very easy to think "Bankers? Greedy, money-grabbing, selfish...blighters the lot of them." But of course, that's utterly untrue — every person is unique, and while it's easy to hate a faceless group of people, it's impossible to do so when you encounter people as individuals.

The hedge fund manager seemed to be looking at the world through a grey blanket of exhaustion, tinted with vivid washes of stress as his screens of figures changed from green to flashing red. His face showed a completely different kind of intensity as he printed out and mounted huge prints of his children (he had separated from their mother), smoothing the prints lovingly into an album. The money collector (I never did quite work out what his job involved) seemed to be a constant bundle of tension, and I feared for his poor heart. He wasn't rich, and yet his life had been one long round of worry about meeting the demands of his job and keeping a roof over his and his wife's head. The only time when I saw the stress ease from his face was when he was talking about motorbikes and the joy of just getting on the bike and going for a ride — then he looked free at last.

The Subway sign holder was an exhausted Bangladeshi man, holding the sign for minimum wage 10 hours a day on freezing streets, then working in a restaurant in the evening, and trying to look after his teenaged daughter alone in the time between. When she went into hospital and he had to visit her, he lost the sign holding job, and had to trail around restaurants, literally begging for a job. That was heart-breaking.

In many ways, the street sweeper seemed the most serene and happy, even though he wanted to get out of the city. He was an avid reader of New Age philosophies, trying to make sense of his life. But he had some startlingly poetic opinions about his job. Most people, he said, think of street sweepers as losers, but he saw it as serving his community. And if you can't make any job — even street sweeping — into a "graceful act", as he put it, then how can you act gracefully towards yourself or others? That really struck me. He's right, I think. It's not what you do, but how you do it that matters. It wasn't clear whether he actively chose his profession, or whether it was a last resort, but he seemed to me to be like a non-religious monk in some kind of gritty, open air monastery. He did his job as gracefully and mindfully as he could, and was aware and in touch with everything going on around him, in stark contrast to the others in the film, who seemed to have turned in on themselves, out of self-protection.

Most TV programmes and the newspapers deal in broad brush strokes and crude stereotypes, which is why it's so valuable to have programmes like this looking at individuals with a humane and non-judgmental eye.