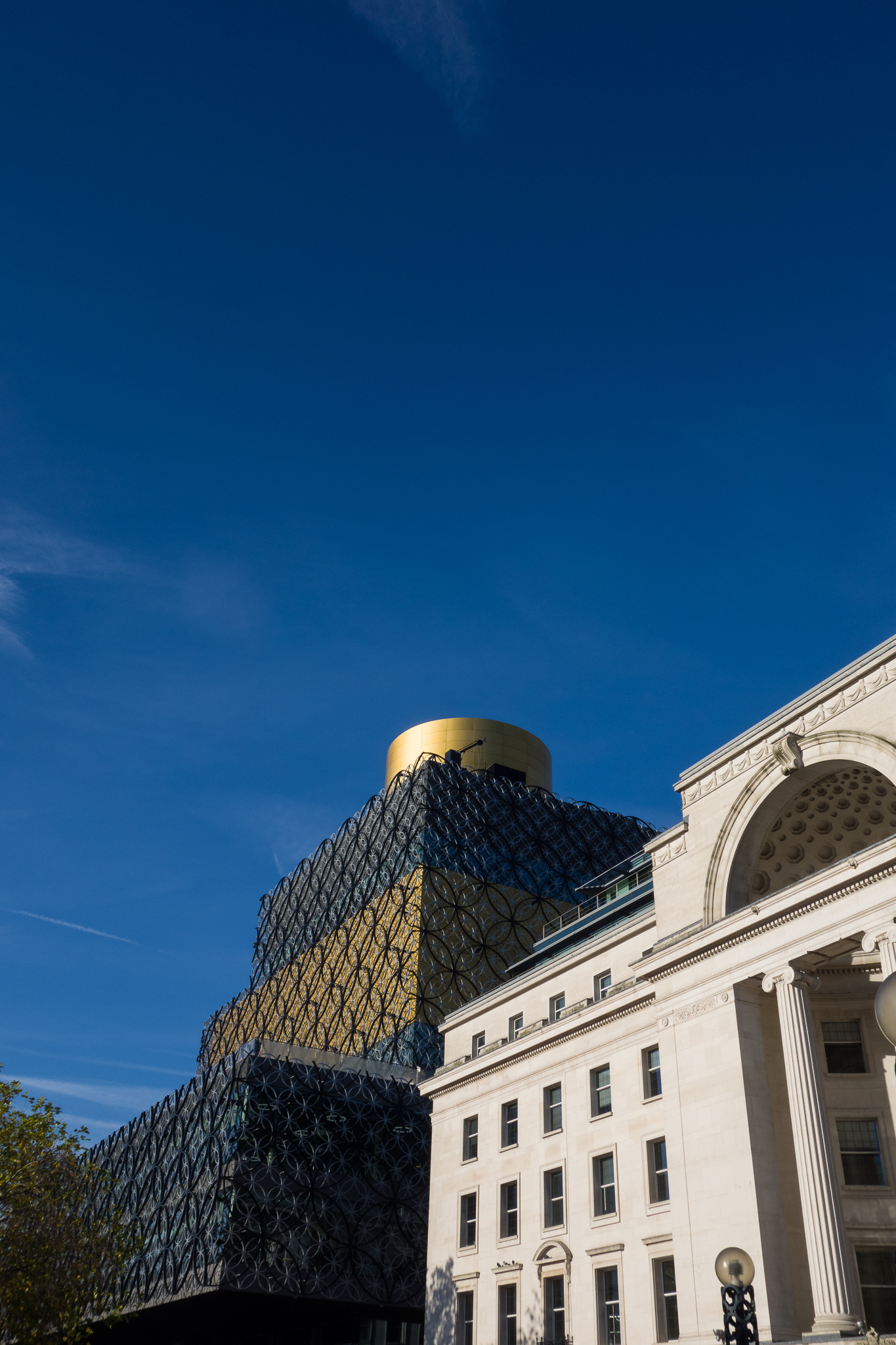 In September this year, an enormous new library opened in Birmingham: the Library of Birmingham. I hadn’t yet had a chance to visit, but this Saturday, I decided that since the weather was so lovely, I would make a special trip into the city and have a look around. I went armed with my library card and my camera, and was curious about whether it would feel like a place I would like to visit again, or whether it would be a showy, brash bit of architecture — all style and no substance. 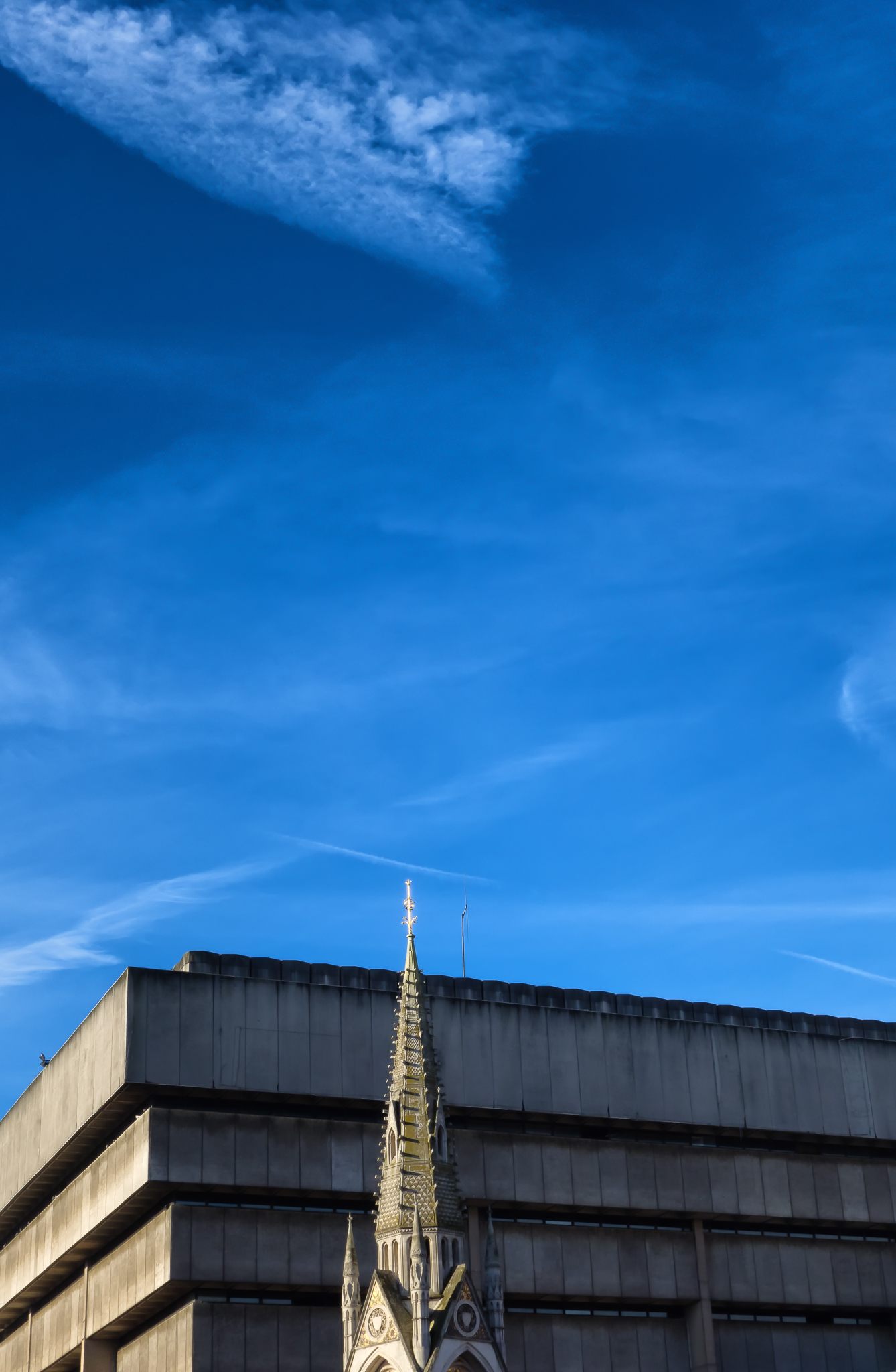 Birmingham already has a large library in the city centre, the Central Library you see above. This is a big, concrete, brutalist ziggurat that is loved by some people but derided by many. Part of the problem is that the architect’s original vision for the building was almost immediately compromised. The building was supposed to be clad in Portland Stone, but it ended up being cast in concrete. This surface went the way of all concrete, and became a grimy, dirty, grim-looking surface. The underside of the reference library (the inverted pyramid you see in the photo) was supposed to be open and supported on columns, so that you would walk through an open courtyard into Centenary Square beyond. That got boxed in and filled with tacky, cheap outlets and festooned with neon. Unless you are a big fan of brutalism, the place is now a bit of an eyesore.

I have to say that I’ve never actually been inside the library part of the Central Library. Birmingham City Council allows you to reserve books online from any of the libraries and have them delivered to your local library, and you can also return books there. Since our local library is in our street, this has always been the most convenient thing to do. However, there is almost nothing I like more than wandering around a large library and browsing, both for the atmosphere, and for the element of serendipity in finding books you hadn’t known about before. I’m also very keen on having a space in the centre of the city that isn’t a shrine to consumerism. If you don’t like shopping, then the city’s museums and art galleries are the only places you can go on a rainy day to spend some time in an different environment and be around other people without needing to be to sociable. 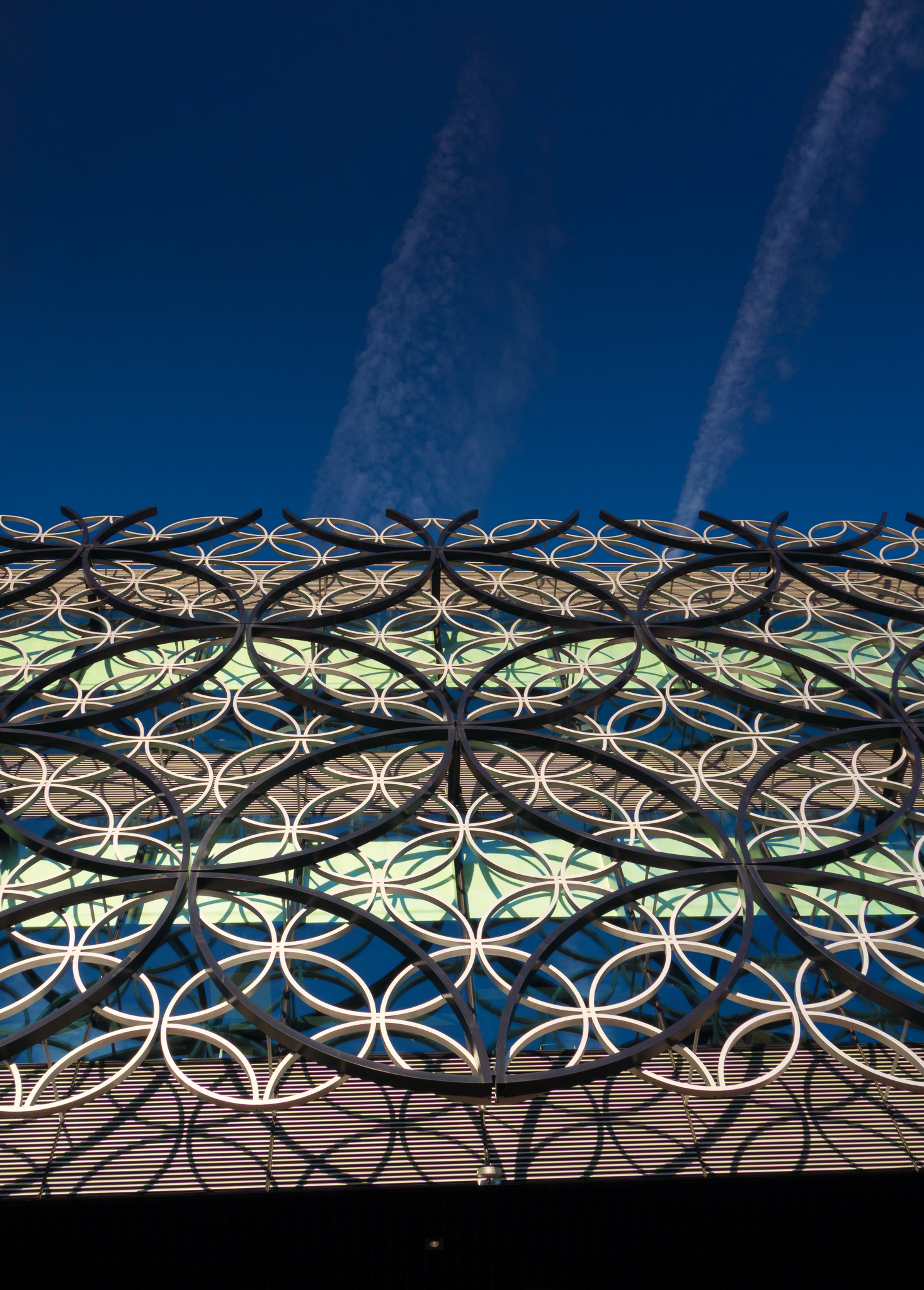 The new Library of Birmingham is a series of blocks of decreasing size, topped with a golden rotunda. I’m not sure what it is about Birmingham and cylinders, but the city sure does love them. The exterior of the building is clad in overlapping metal circles of differing sizes and colours. From a distance, it looks a bit like it is covered in barbed wire or fishnet stocking. In other words, classy. I’m not at all keen on the circles from the outside, though they do have an abstract appeal when you get up close and crop a small section of them, as in the photo above. They also bother me because as you can see, each block does not fit a whole number of circles, and the top row is cut off. When you look from the distance, they have done something rather clever, because the half circles on the next block up appear to join seamlessly (from some angles), generating an optical illusion that it is one continuous surface. I like the cleverness, but those broken rows still bother me when you see them from other angles. The whole effect is too ‘busy’ for my taste. 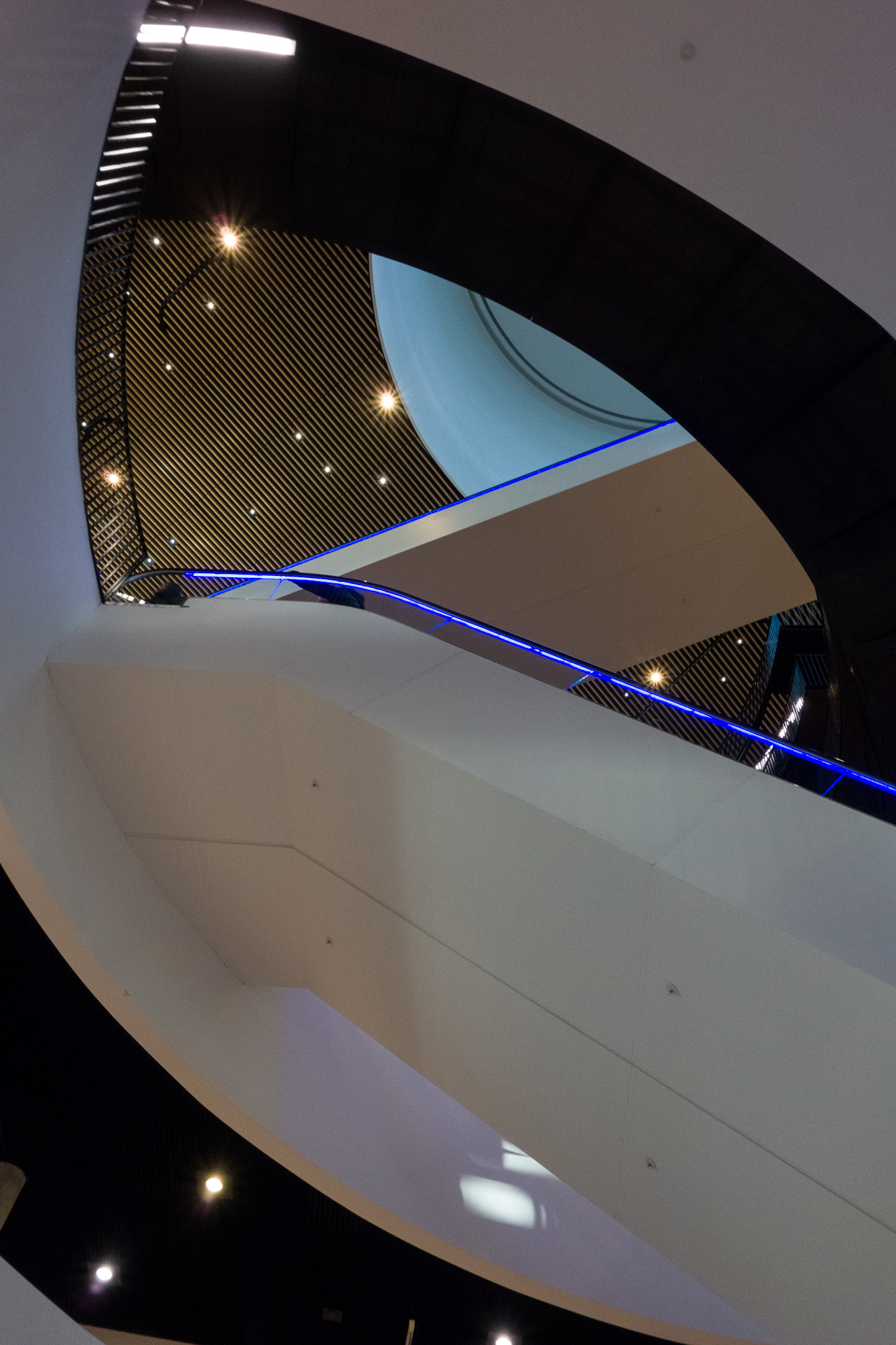 However, libraries are about what’s on the inside. Who cares what they look like outside? I’m glad to say that the inside of the library is stunning. From the ground floor, you go up a series of escalators inside the cylindrical void of the rotunda. This has a glass roof, letting light into the heart of the building. You can’t help looking up as you go up the escalators, open-mouthed at the dramatic black and white shapes linking together and punctuated by lights and electric blue lit handrails. 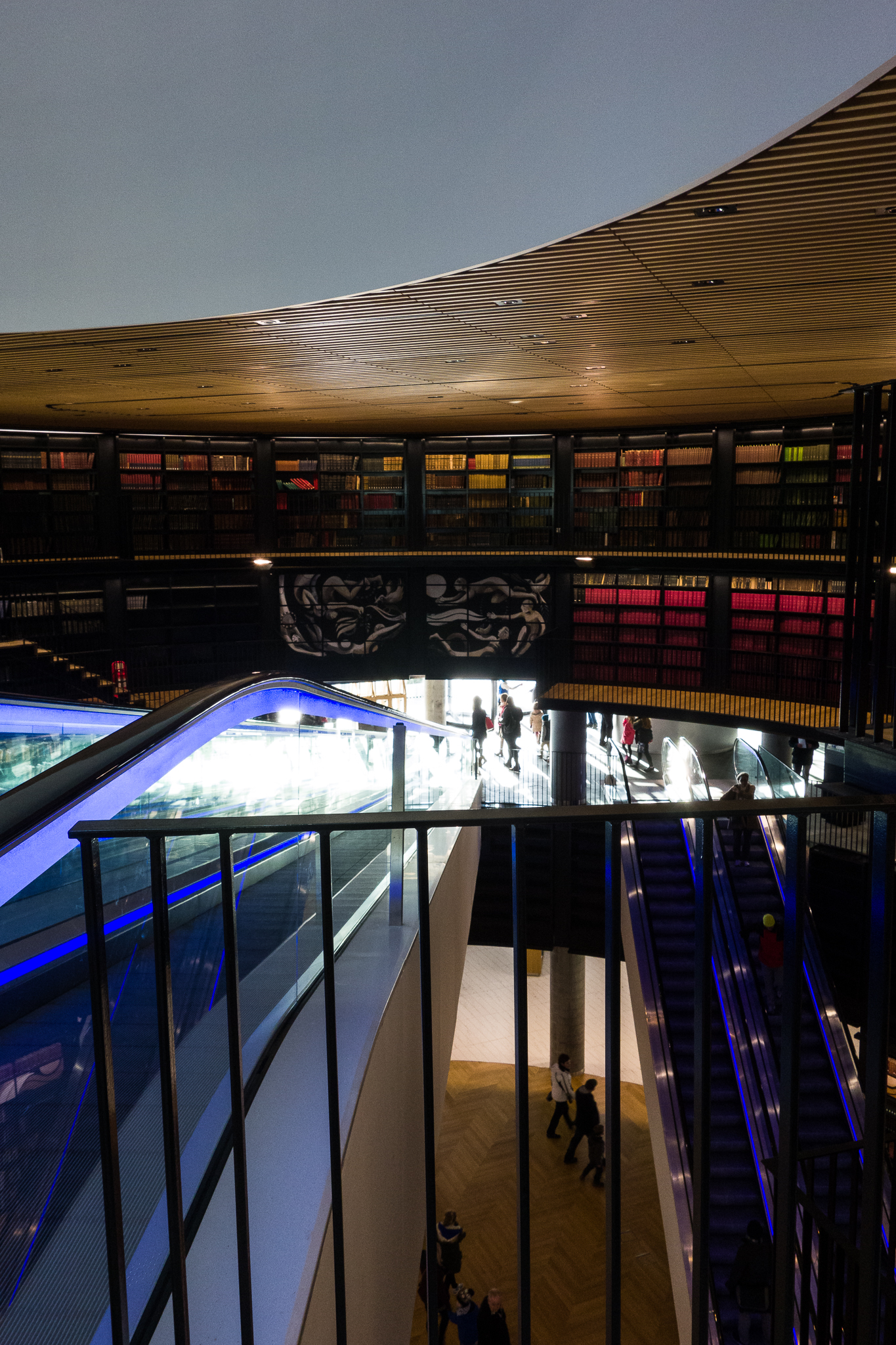 A few floors up, there’s a ‘Book Rotunda’: two levels of shelving on balconies set into the walls of the rotunda. It houses important literature, and is darker than the rest of the library. Despite being open, it has the lovely quiet, cave-like feel of old fashioned libraries.

Other floors house open areas of shelving arranged at angles so that your eye is drawn out to the windows and the view outside. Desks, comfortable chairs, computers and shelving areas are all mixed in, so despite the huge floor area, you can find a quiet corner to work, or you can choose to be around other people. This is also where you see an unexpected benefit to those ugly exterior circles: they cast gorgeous, swirling shadows on the floor and shelving of the library, particularly on a winter day when the sun is low and the light is crisp and clear. 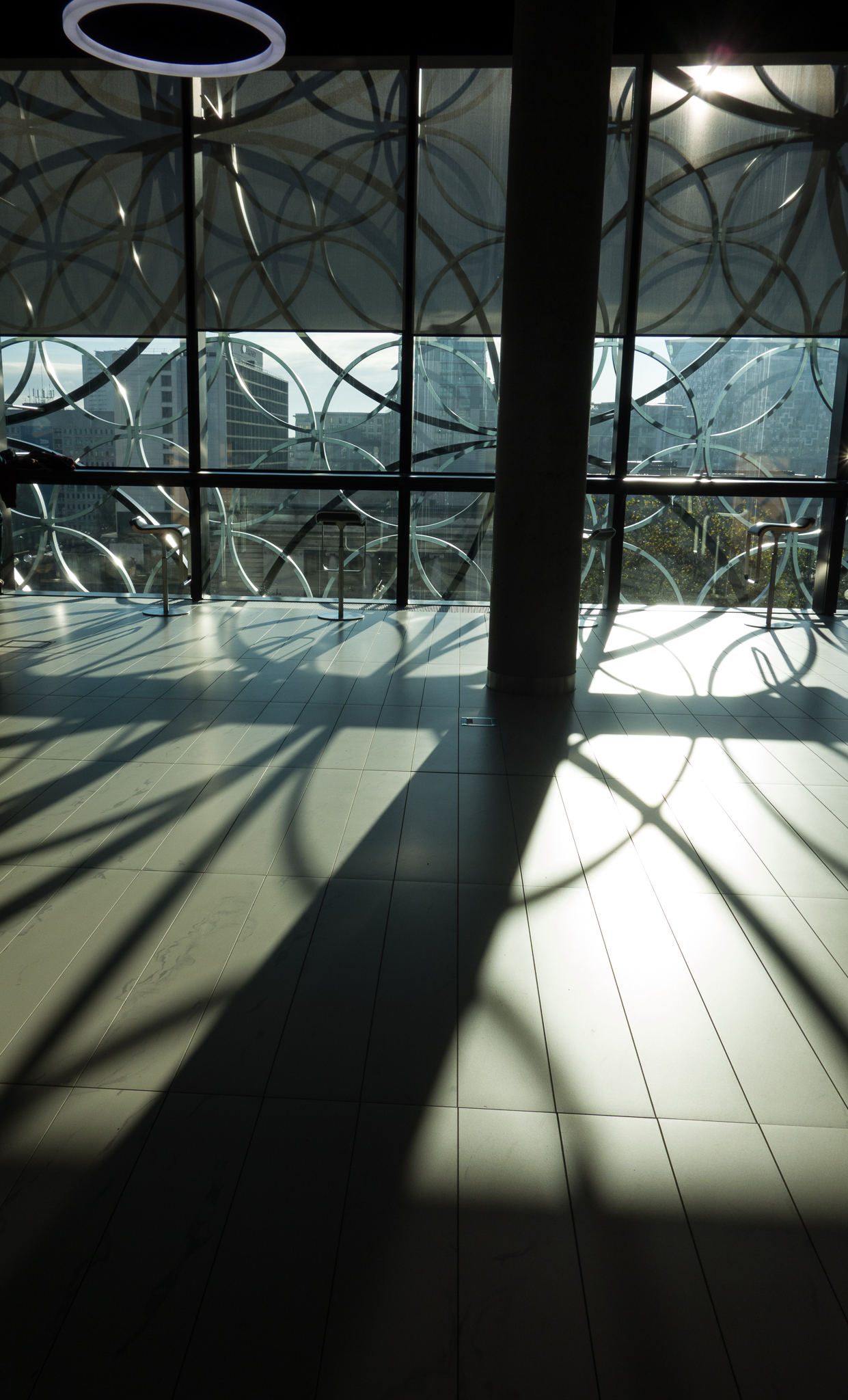 I think that photo might be my favourite of all those I took in the library, but you know how much I like shadows and light. I can imagine coming for a few hours to visit the library, and just sitting quietly with a book in the light, glancing up now and again at the patterns that the shadows make.

There are also two gardens, one on the third floor (the Discovery Garden) and one on the roof right at the top (the Secret Garden), but the latter was closed the day I visited because of “poor weather”, whatever that means — it was a gorgeous day. 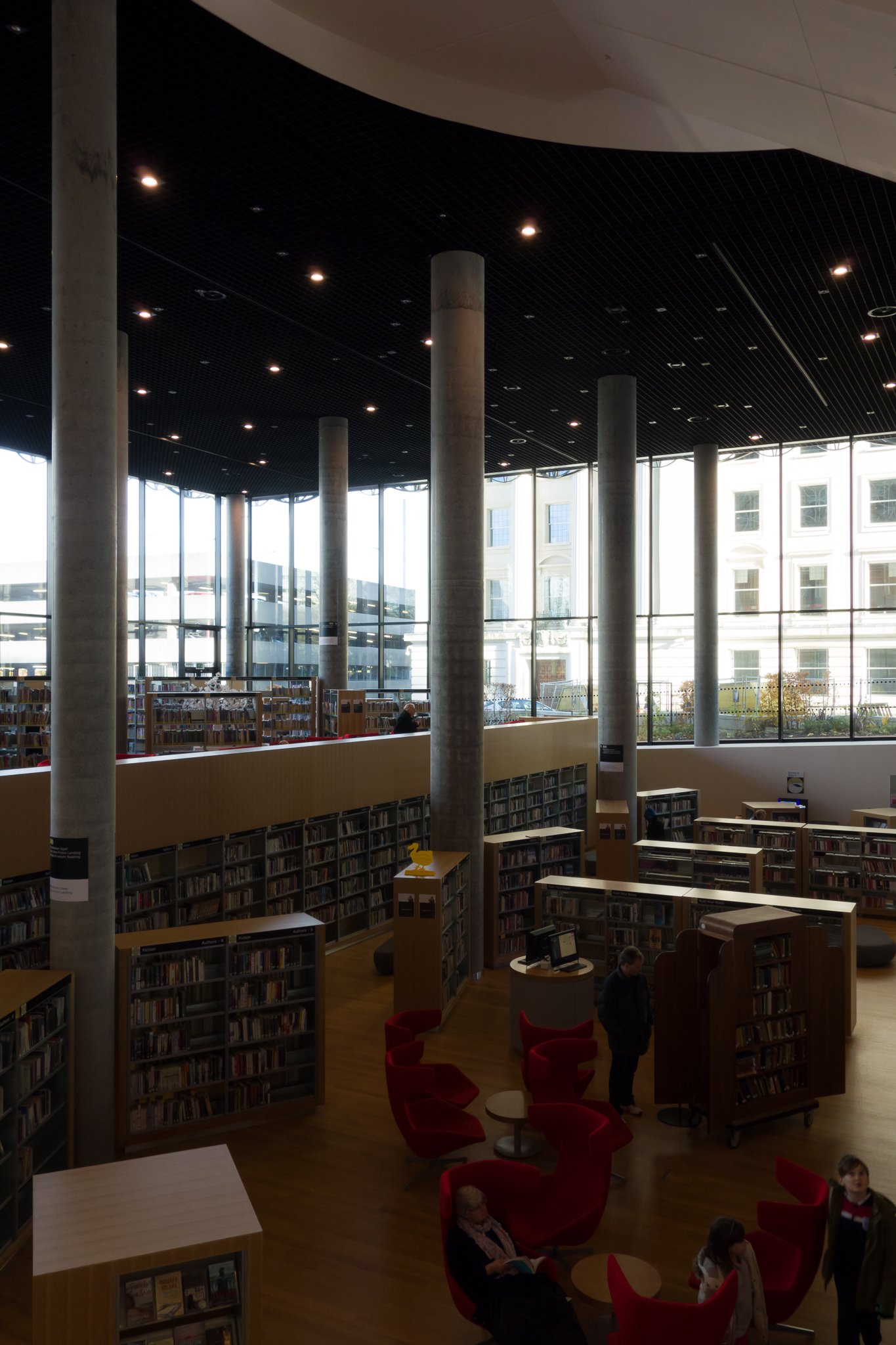 It takes a bit of time to orientate yourself in the library. I was looking for the fiction section, but couldn’t find any reference to it on the map of the library. When I asked a librarian, she gave the quick smile of someone who has had to say this a lot recently, and told me that fiction was in ‘Book Browse’ on the ground floor. I might be over-interpreting, but I felt that the subtext of her tone was, “…and yes, ‘Book Browse’ is a ridiculous and confusing name.” It’s particularly confusing because you can browse almost all the books in the library. Anyway, despite the slightly cringe-inducing names they have for some sections (‘The Knowledge Lounge’ — don’t all books contain knowledge?), I really liked the place. It was busy when I visited, and people of all ages and walks of life were browsing, reading, working, and just hanging out in a nice environment. It’s a huge place, but the little spaces within it feel intimate and cosy. It doesn’t have the reverential hush of a grand library (which I think is a good thing because it makes people feel comfortable and welcome), but at the same time, you can find quiet spaces if that’s what you prefer.

I had great time in Book Browse1, and came away with a couple of books, one of which I had never heard of before. I’m sure I’ll be back. If you’d like to see larger versions of the photos here, and some others I took in and around the library, they are in my Urban gallery on Smugmug2.