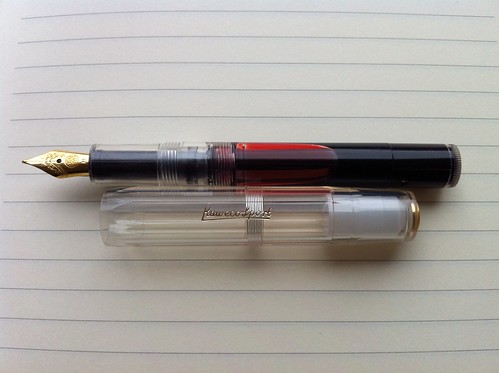 It was my birthday recently, and I was lucky enough to be given gifts of money by a few lovely friends and family. One of the things I bought was a Kaweco Classic Sport fountain pen. I know, I know: another fountain pen? Wasn’t I raving about the Lamy 2000 only recently?1 Well, I haven’t fallen out of love with my Lamy — far from it. I use it every day, and each time I pick it up and write with it, I love it even more. It is the smoothest, most comfortable, most gloriously tactile fountain pen I’ve ever used, and I’m pretty sure it will always be my ‘main pen’. So why did I buy a new fountain pen?

First, fountain pens are pretty addictive. Once you’ve used a few, you find out what style you like, and you get tempted to collect others. If you follow fellow fountain pen addicts on Twitter (@HelgeG, @BestofTimes and @m_s, I’m looking in your direction!), you get even more tempted by someone else’s shiny new discovery. In fact, we just end up enabling each other, but I suppose there are worse things to be addicted to. The other reason (I like to pretend this is the main reason, but who am I kidding) is that I like using different coloured inks, for which you really need more than one pen. My main writing is usually in blue or blue-black ink, but I have some lovely red, green, purple and brown inks that I’d like to use occasionally for annotating notes, marking and so on.

I think it was @BestofTimes who got me looking at compact fountain pens, and somehow that led me to the Kaweco Classic Sport. I think that I might have seen it before, but while I thought it was a really neat little pen, I was put off by the fact that it was a cartridge pen, and that the barrel was too short to accommodate a converter for bottled ink. Then I found out that you could easily convert it to an eyedropper, and that’s when I decided I had to have one. It’s actually a pretty cheap pen (as fountain pens go), so buying it and having a go at converting it seemed like a fairly low risk option, as well as giving me a very compact ‘marking pen’. 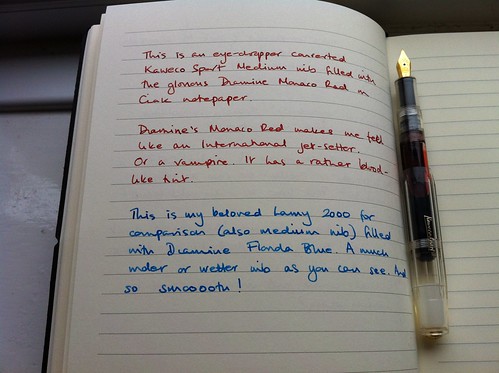 For those of you who don’t know what an eyedropper pen is, it’s a pen that you fill by pouring ink straight into the barrel, and it relies on having a fairly water-tight seal between the barrel and the section. It’s pretty low-tech, and the ‘conversion’ process for the Kaweco was absurdly easy: all you have to do is remove the cartridge, and smear a small amount of silicone grease (as used in plumbing and on scuba equipment) around the threads of the section to improve the seal between the section and barrel. Then you just use a syringe, eyedropper or a freakishly steady hand to fill the barrel with ink. Even though it is a short barrel, the Kaweco will take a very useful 2ml or so, so you can go a long time between fillings. Only time will tell how leak-proof this arrangement is, but after several days of use and of knocking around in a pencil case in my bag, there is no sign of any leaking. I’ll probably clean and renew the silicone grease when I refill, but given the volume of ink it holds, that’s likely to be quite a while.

I really like this little pen. For one thing, it allows me to use my gorgeous Diamine Monaco Red ink that I’ve been dying to use properly for ages. I don’t want to use red ink all the time, so I haven’t filled the Lamy with it, but the Kaweco is the perfect vessel for it. I deliberately choose the transparent model so I could admire the delicious red velvet/antique book leather colour of the ink. The nib is pretty smooth for a cheap-ish pen, but not quite as glorious as my Lamy. However, I think if you were new to fountain pens, you would be very pleased with it. It certainly doesn’t snag on the paper, and there seem to be no problems at all with skipping or starting the ink. It is a drier writer than the Lamy, as you can see from the photo above (please excuse my handwriting). Both pens have a medium nib2, but the Lamy appears much broader, partly because of the wetter line. This actually suits my main purpose for the pen quite well, because I usually have to write quite small when annotating notes or marking students’ work.

The pen is really small and light — I couldn’t quite believe how small and light when I got it out of the packaging. Since I have tiny hands, I can actually use the pen fairly comfortably unposted, but it is meant to be used posted by people with normal sized hands, and feels better weighted that way. The cap sits right down over the barrel, so when the pen is closed, it is more or less the same length as when it is uncapped and unposted. It feels comfortable in my hands, but not as glorious as the Lamy. You can buy a clip as an optional extra, but I didn’t bother with that: the facets in the cap stop it rolling around on the desk.

I’m really fond of this little pen. I think it makes a great-value ‘alternative colour’ pen for people with other fountain pens, or it would be a superb starter pen for someone new to fountain pens as an alternative to the ubiquitous Lamy Safari.

I have to confess that I was tempted into buying yet another pen with my birthday money (I still have other colours to use!) by the Twitter Fountain Pen Sirens, so I also have a TWSBI Diamond 540 on backorder, which should come sometime next week. What can I say — I’m a sucker for a reasonably priced piston-filler. And so it begins…