About a month ago, I mentioned that I'd made some customisations to TextMate to help me with the plain text journal file I keep to jot things down on a day-to-day basis, and a couple of people expressed an interest in me releasing a bundle with the modifications. It almost didn't seem worth doing because what I'd mostly done was to add minor things to the Markdown bundle. However, I thought that people might be able to add to it and improve it, so I decided to bundle it up.

There's also the snippet to make the entry itself (as I described in the my previous article), which is inserted with the tab trigger 'dts'. I also modified Alan's excellent suggestion to paste the clipboard into a new entry (tab trigger: dtsp).

There's already a built-in command to toggle all of the entries open or closed (Option-Command-0), but I wanted to be able to toggle a single entry closed when my cursor was somewhere between the date header and the closing ***. So I made a macro called 'Toggle folding on this block' which is triggered with Control-Command-F1. 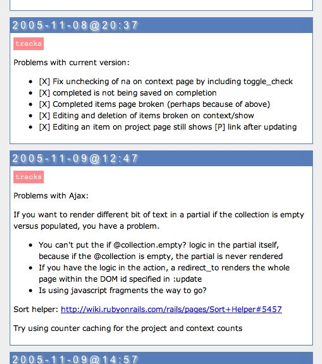 The Preview in Browser command is just copied straight over from the Markdown bundle, but I've modified the Preview command to pretty up the output a bit, as you can see in the image to the left. Tags are marked up with a coloured background, and entries outlined in colour with a prominent heading. The CSS styles are in the Preview command, so if you open up the Bundle Editor you can tweak the styles to your taste.

Update 31-03-2011: Apparently Merlin Mann (hello Merlin!) was kind enough to mention this bundle on MacPowerUsers Podcast, and those of you have visited will have noticed that the link to the bundle was broken. Oops. I had left it on Bingodisk (a service which has now closed) and neglected to make a backup. Double oops. Anyway, I have uploaded my own copy and altered the link, so you should be able to get hold of it now. I can't absolutely guarantee that I haven't tinkered with the bundle since originally publishing this post, but I think that it should be substantially the same. You might also like to check out Alan Schussman's JournalTasks bundle, which adds various useful task-related features. Happy Journalling!

Update 01-04-2011: I didn't realise that there were two podcasts with Merlin, so linked to the wrong one. I've updated it to the correct episode (46) now.