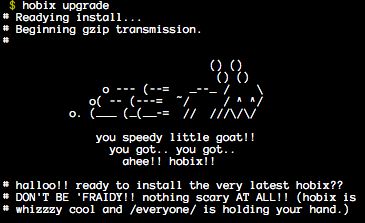 In the course of keeping up with Ruby-related things, I came across a weblogging engine written in Ruby and called hobix. The hobix homepage could well be the maddest I've ever come across; the tagline "hobix: the white pantsuit of weblahhing (sic)" gives you fair warning. Hobix is written by _why the lucky stiff (his friends call him _why), who is also the evil genius behind Why's (Poignant) Guide to Ruby (of which more later), and the excellent RedCloth (combined Textile and Markdown format markup in a Ruby library).

One of the unusual things about hobix is that you don't have to manually download and install things. You simply open up a terminal and type:

This gives you the friendly little ASCII goat pictured above, and step by step instructions for getting it installed. You can put it on a server or on your own machine; in the latter case, you just upload the HTML files it generates to a web server. All the configuration files and entries are written in YAML format, whichâ€"while a bit picky about whitespaceâ€"is fully human-readable. When you want to make a new post in your weblog called hobblog, you just type:

This opens your default editor (Vim in my case) with a skeleton of the post called 'short-title' in the section of hobblog called 'news'. When you save and close it, scripts rebuild the site automatically. It's so easy that I'm tempted to use it as a kind of personal wiki. You can either just view the files through file:///path_to_files URLs or you can run the site on a local Apache install or WEBrick server. It seems to me that it's not really any more difficult to post something than the steps required to post to a wiki if you're running it locally. It also makes you smile each time you use it (see screenshot above).

_why is a genius. His 'Why's (Poignant) Guide to Ruby' isâ€"I feel safe in assertingâ€"the only programming manual in which cartoon foxes chant "Chunky bacon! Chunky bacon!" until the author includes chunky_bacon as a variable name in his code examples. And guess what? You can also learn Ruby from it.