A while ago, I noticed this Make project to create custom-fit earbud surrounds using a commercially available DIY earplug material made by Radians. I thought it looked a great idea, as I've often been tempted by the companies that offer custom-fitted earbuds, but balked at the price. I had a pair of Shure EC2 earbuds that sounded fantastic, but were fiddly to fit properly. So I had a go and was really pleased with the result. They now fit really well in my ears and don't get dislodged as I move around. 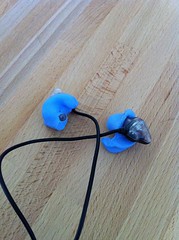 I had only used half of one of the packs I ordered for the Shures, so I decided to try doing the same thing with the stock Apple earbuds that came with my iPhone. I love the integrated microphone and controls on those earphones, but they leak sound like a sieve, which makes me feel like an inconsiderate lout when travelling on public transport. They also tend to fall out with the smallest movement, which is maddening.

My first attempt using the same method as with the Shure earbuds was not a success, because I had to cut away too much material to expose the drivers, which meant that the silicon wasn't strong enough to hold its shape. I was determined not to give up, and tried again, this time inserting the earbuds in my ears first, then moulded the silicon material over and around the earbud to fill in as many gaps as possible. 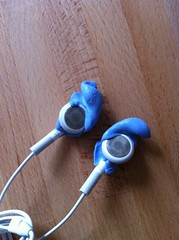 This worked much better, and now my Apple earbuds are magically much more comfortable and don't leak sound any more. I'll probably reinforce them a bit in future with Sugru, as the silicon of the earplug material is quite soft, and I want to make sure that it stays securely mounted on the plastic. The earplug silicon isn't adhesive, but Sugru is, so it should adhere to both the stem of the earbud of the earplug silicon to toughen things up a bit. However, for a cheap material, it's a quick and easy hack to improve the earbuds a lot.

As a side observation, outer ears are a very funny shape, and mine are not at all symmetrical!