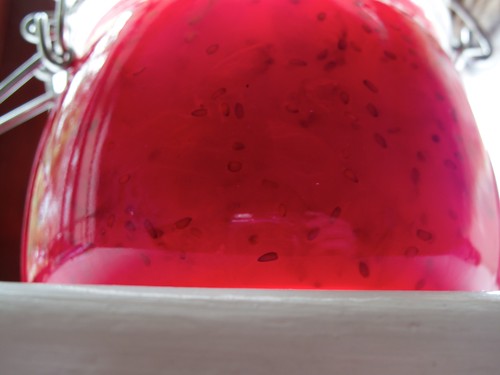 One of the things about having even a semi-successful allotment is that you end up with gluts of things. You can (and we do) give some stuff away to friends or neighbouring allotmenteers, but you inevitably still end up with quite a lot of one thing at a time. We’ve currently got a lot of gooseberries (despite the best efforts of the greedy wood pigeons on the allotment), and since there’s only so much crumble two people can eat, I decided to make some jam.

I’ve made rhubarb jam a couple of times, but not gooseberry, so I looked up a recipe online. It turns out that it’s pretty much the same as for any other jam: an equal weight of sugar to fruit, a bit of water to cover to simmer the fruit in, and that’s it. If you’d like a few more details, I used this recipe, without the butter.

The first time I made jam, I didn’t have a sugar thermometer, so I had to mess about with chilled plates and blobs of proto-jam to try to find out the setting point. That was a bit of a faff, and I don’t like having to estimate things. Wondering whether my jam was sufficiently wrinkly when pushed with a finger was much too much like guesswork for me. So the next time we made jam, we got a sugar thermometer. Through the Wonders of Science, all you have to know is that you have to get the temperature up to 105°C and it will set — easy!

This time I didn’t make the same rookie mistake that I made last time, of bending low over the bubbling pan to read the temperature from the thermomenter. Jam spits, and blobs of hot, sticky sugary stuff at 105°C are not pleasant on your face. Luckily my blink reflex saved me from a scalded cornea but I did have a tiny burn on my eyelid for a few days, which was painful. I learned my lesson, and stayed well out of the splatter zone this time.

We have three different varieties of gooseberries, but this jam was made from Pax, which is a lovely pink colour before you even start, so the jam is a glorious shade. I tried to capture the sun filtering through the jar, but reflective surfaces and unhelpful cats did not make this easy. 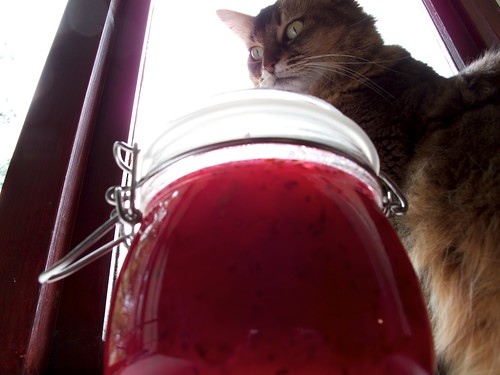 I filled two 0.5 L jars, and we tried a bit of the leftover jam this morning. It’s delicious, and it has set perfectly. Apparently gooseberries have a lot of pectin, so the jam always sets well. I think if I made it again, I would reduce the amount of sugar a little bit, because Pax is quite a sweet variety, and I would like to get some more of the gooseberry tartness into the jam. Mind you, I used to eat gooseberries raw from the bush in our garden when I was little, so I’m pretty tolerant of the tartness! Mr. Bsag thought the jam was just about the right level of sweetness. By the way, the preserving jars you see in the picture are actually from Ikea. Many cooking shops sell the proper preserving jars for an absolute fortune, but Ikea has 0.5 L jars for about 50p, and 1 L for about £1, if you are interested in making some jam or chutney yourself.