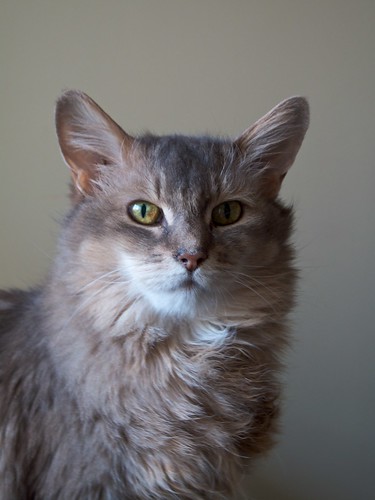 As those of you who are on Twitter might have seen, we had to have our cat Cleo put to sleep yesterday. Cleo had become a huge part of our little household, and because I wrote about her and published photos of her on this blog, I feel that it's appropriate to write her an obituary.

We don't know anything about Cleo's early life. She was rescued by a very kind woman who breeds Maine Coon cats, who spotted her hanging around under vehicles, skinny and frightened. Eventually, she coaxed her inside where she was feed, checked by the vet and found to have no microchip to identify her owner. She's a Somali cat -- a pedigree breed, rather than a Heinz 57 varieties moggy -- but extensive enquiries and searches by the Somali Cat Club failed to turn up anyone reporting her missing, so she was put up for re-homing. It still amazes me that her original owners were not scouring the country for her, because she was such a lovely, affectionate and good-tempered cat. We had been looking around for a cat to adopt, and were interested in Somalis, so we jumped at the chance.

She coped brilliantly with a very long drive from Kent (where she was being looked after) to our house in Birmingham. It took even longer than we'd anticipated because of terrible traffic on the M40, but she sat quietly, looking with interest at the passing cars, and occasionally commenting with her bird-like trilling chirrup. She soon settled in to her new home very comfortably, taking every opportunity to squish between Mr. Bsag and I on the sofa, and luxuriate in being stroked or having her tummy tickled.

She was a very sociable cat (with humans -- she hated other cats), and always wanted to be wherever her humans were, hanging out and acting in an important supervisory role. Whether you were reading the paper, cooking or visiting the toilet, she made sure that she was overseeing the process closely. I don't know whether you've ever sat on the toilet while a cat stares at you with enormous interest, but it's slightly off-putting, I can tell you. One of her favourite locations was my desk, directly between my keyboard and computer. She'd excitedly jump up on to the desk as soon as I sat down, annoint the corners of my laptop with her cheek scent glands, and then settle down -- purring like a Harley Davidson motorbike -- to watch the screen. More than once, she has contributed long strings of characters to this blog with a misplaced paw, requiring more work of her editor. When she sat upright, I had to lean to one side or the other to read the screen, and her long fur meant that I had to rummage around in the fluff to locate the number keys. On the positive side, my keyboard was always free of dust (though not cat hairs) because of the efficient action of her feather duster-like tail. Her other favourite place was the back of our sofa, where she'd sit of an evening, acting as a warm headrest for Mr. Bsag -- if he moved, she'd move too so that she was tucked in to his neck, her tail draped around him like a living scarf.

I don't know whether living rough put her off the great outdoors, but she was very much an indoor cat. I got the distinct impression that she thought Outdoors was all very well, but much better viewed through a pane of double glazing, preferably while snuggled in a fleece throw, and next to a warm radiator. She liked the TV, particularly CBeebies and wildlife documentaries, and was mesmerised by animated Flash adverts on websites. For exercise, she required her humans to throw ping-pong balls up the stairs for her to pounce on as they rolled back down, and was quite a good passer of the ball.

She would announce her presence with a chirrup, using a wide variety of different intonations, pitches, durations and amplitudes. Her 'trilling while caught unawares by a yawn' was particularly adorable, but you could have quite a 'conversation' with her. One of my most treasured memories is of lying in bed on a Saturday morning, listening to Mr. Bsag and Cleo in the kitechen, having a long chirrup conversation with interrogative rising inflections answered by falling inflections.

And so we come to the end. At the start of this week, having been very lively and cheery over the weekend, she was suddenly weak and listless, not eating or drinking and hiding away in dark corners of the house. We took her to the vets and she was put on a fluid drip, antibiotics and pain relief while they did blood tests to try to find out what was wrong. Her kidneys had failed, and though we hoped that they might recover enough function if rested, it didn't turn out that way. Her blood tests revealed that their function was declining rapidly, and she looked so depressed and miserable that the only thing we could do was let her go. We don't know what caused the problem, but it could have been a chronic condition which only now tipped over into crisis point, or an infection causing catastrophic damage.

I've had to stop writing this several times, because my screen became blurry and my keyboard inexplicably damp, but I want to describe it all. At the end, I held her in my arms, Mr. Bsag stroked her, and the vet injected the anaesthetic into her drip line. She slipped imperceptibly and gently over the line between life and death. We took her home and found a nice spot under a hawthorn tree in our garden, surrounded now by hellebores and celandines -- a place that we can see from our kitchen window. We dug a hole in the rain, then went inside where she was lying on the sofa in her favourite place. Gently, we curled her into her favourite sleeping posture, with her tail wrapped tightly around and her back paws touching her nose, said goodbye and wrapped her in a blanket. It was such a small hole, because she was a tiny cat with a huge presence. A paving slab and a bowl of primroses marks the spot.

Some of you may be thinking, "What a lot of fuss -- it's just a cat." But I'm not a species-ist. I try to take every organism on its own merits. I like some animals more than some humans and some humans more than some animals. Cleo had a big, positive impact on both of our lives. She gave as good as she got, and as when a special human dies, we find that the enormity of her absence is overwhelming. We keep expecting to hear the thud of her jumping off the windowsill in our bedroom and hurtling downstairs with a greeting call, or jumping up on to the sofa to snuggle up. I still stop at the top of the stairs, waiting for her to rush past me, stop and stretch across the second step, then carry on. And there's a cat-shaped nothing in front of my screen.

We're trying to remember her when she was healthy and happy. The picture above turned out to be the last that I took of her, but we have hundreds of others (you can see a small selection here. I think that she had a happy, comfortable life with us, though it was far too short. And she made us happy out of all proportion to the length of time that we knew her.