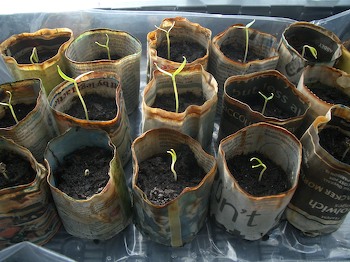 I sowed some 'Sweet Chocolate' pepper seeds a few weeks ago in the airing cupboard, because they need at least 25°C to germinate, and apparently you need to get them started early in the UK to get a long enough growing season. They've done better than I could possibly have hoped, as you can see above. It's really the first time I've ever grown anything from seed, and I was watching them constantly for signs of life. When I saw the first tiny white shoots poking through the compost, I was really excited. Despite the fact that I'm a biologist, and in theory know how it works, I find it magical that you can bury a tiny, dead-looking seed in compost, water it, and eventually get a whole plant.

One of the things I hadn't anticipated was how rewarding it is growing from seed, and how it gives you a deep feeling of hope that summer will eventually come. When it is cold, damp and foggy outside, I peer closely at those vivid green, fragile little shoots, and immediately think of the hot summer sun turning the fruits sweet and juicy.

It's not an original observation, and sounds irritatingly hippyish and new-agey into the bargain, but growing from seed, harvesting and saving seed for the next year (which I also intend to do) does seem to help you to connect yourself to the future and the past. It helps you to see life as a cycle with things to enjoy and look forward to as they come around again, rather than a kind of Sisyphean unending toil.