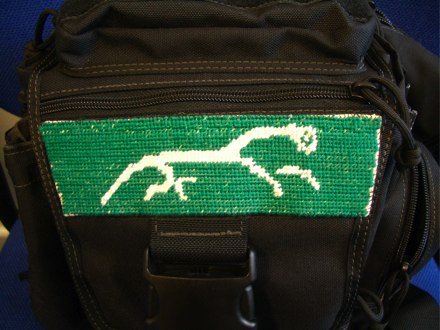 In my previous post about my new Maxpedition bag I mentioned that I wanted to 'de-militarise' it a bit. I decided to create a bit of needlepoint work (or tapestry -- I'm such a newbie at this, I don't even know the correct term) which I could mount on the velcro patch on the front flap. The space available was quite long and thin (or 'widescreen' as I tend to think of that format now), so I needed a design which would work well in the space. Since I haven't done any needlepoint since I was in my early teens (and that involved using kits) I also needed a fairly simple design that would stand up to a few errors.

I've always loved the White Horse of Uffington, and I thought it would fit the space well. I'm no artist, but I had a go at sketching the outline of the horse on the canvas using the photo on Wikipedia for reference, and then -- like any good geek -- searched the internet to find out how one actually does needlepoint. Then I spent a happy weekend building up the design and learning how to keep the stitches neat. In the end, I was quite pleased with the result, though it has to be said that the back of the canvas is a disaster area. Still, that part is safely encased in velcro now, so no-one need ever know that I was breaking several cardinal rules of needlepoint. The Horse is a bit wobbly, but then so is the original, so it doesn't look too dire. I found it quite relaxing (when the silk wasn't getting itself into a Gordian knot), and I'm planning another panel for the pocket on the top of the bag. Any suggestions for designs?