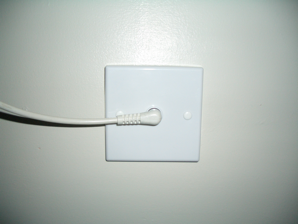 This may look like a perfectly ordinary coaxial socket, but it represents an enormous amount of pride and achievement on my part. When we moved into our house, there was an existing TV aerial in the loft, but it wasn't particularly good for Freeview reception. So, sweating copiously in the sauna-like atmosphere of the loft, I wired in a new aerial that was more suitable for digital reception. I was quite proud of that, but I wasn't going to stop there. In the office, we have our eyeTV hooked up to the iMac, and it was still using the rather pathetic indoor aerial which wasn't really up to the job of getting a reliable signal, so I wanted to split the signal from the new loft aerial and run a cable down to the office.

As ever, I consulted the font of all DIY knowledge (my Dad), on the best way to go about this. Obviously, I needed to fit a Y-splitter to the downlead for the aerial, which meant unwiring my previously installed cable and fitting various bits of cable with coaxial socket or plug connectors. But then there was the issue of how to route the cable down one floor to the office. Dad's opinion was that drilling a hole in the ceiling and just running the cable down was the easiest way to go, but I was keen to try to drop the cable inside an internal plasterboard wall, and fit a wall socket for a neat finish. Now, he's a perfectionist on every task he undertakes, so this is probably the first and last time that I'll be the one suggesting something that involves more work than he advises; usually, I'm the one taking the path of least resistance. That made me a little nervous. Dad is usually right about these things, and he reckoned it would be difficult to thread the cable through the wall cavity.

Anyway, today I gritted my teeth, girded my loins with a metaphorical tool belt, and got on with it. It has to be said that my first two attempts to drill through the correct spot in ceiling board in the loft to hit the wall cavity were not overly accurate. On both occasions I could see daylight, which I knew wasn't good news. So we new have a couple of holes in the ceilings of my office and Mr. Bsag's studio to repair. Ooops. The third time was the charm, and I was into the cavity. Threading the cable down was surprisingly easy, and it seemed to be falling down to the bottom without snagging on anything. Then I just had to cut out a hole in the wall to fit a flush-fitting wall box for the socket. Amazingly, the cable was right behind the hole (I got my measurements right this time), so I didn't have to fish around blindly to find it. Wiring the socket in was easy now that I've had some practice with coaxial cable, and the whole thing looks amazingly neat for something I've done. Even better is the fact that it actually works; we now have great reception on the eyeTV, and less clutter in the office. Hurrah!