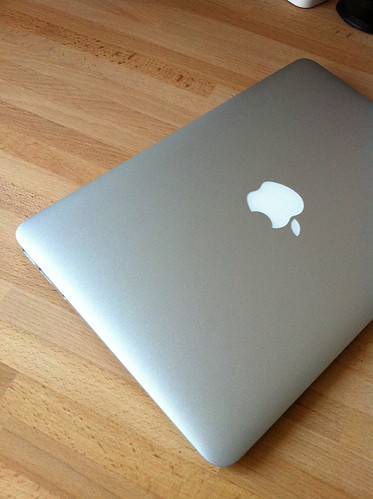 Wow. Has it really been nearly two weeks since I last wrote here? I seem to have been on a never-ending stress treadmill at work, lurching from one deadline to another, never quite catching up with myself. Just to add to the stress, I’ve also had one of those periods when all sorts of things broke or needed sorting out (including my own body, unfortunately). So, I’ve had 3 rather frustrating trips to the doctor (I’m not ill, just in need of a bit of routine maintenance, but there have been…snags). Then the cats made me break my glasses1, so I’ve had a trip to the optician’s to get my eyes tested and buy a new pair of glasses. To cap it all, our trusty old G5 iMac (now Mr. Bsag’s machine) died. At first I thought it might be a relatively simple problem to fix, but it turned out to be prohibitively expensive, and not really justified given the age of the computer. It is over 5 years old, and has the old PPC architecture, which means that we have already had problems with applications that only run on Intel machines. It has had a good innings as computers go, so we decided to put it out to pasture.

That meant that the Bsag household Technology-Trickle-Down Policy (TTDP) swung into effect. Mr. Bsag has more modest computing needs than me, but he still needs a fairly decent machine for managing his artwork, updating his website and so on. He is also — through no deliberate action on his own part — somewhat tough on computers and other items of technology. For example, the wireless mouse which has been in his studio for about a year has a coating of bright red etching stuff 2, making it look as if there has been a bloodbath. So, by his own admission, it’s not worth giving him a new computer.

As Chief Technical Support Officer responsible for administering the TTDP, this gave me an excuse, I mean a legitimate reason, to think about getting a new laptop. I use a laptop quite a lot for travelling, meetings and working away from the office, but also for giving lectures and seminars. I had been using my own white 13” MacBook which I bought a few years ago, but it struck me that this would make a good machine for Mr. Bsag, while I could get a new 11” MacBook Air.

I have admired them from afar since they were released. I think that if you need a laptop to be genuinely portable, 11” or 12” models are what you really want. I know that many people try to get the best specified laptop they can so that they can use it for everything, but a 15” laptop is a big, heavy chunk of metal to lug around. I even found my 13” MacBook on the heavy side. To cut a long story slightly shorter, I ended up getting the model with 128GB flash storage and 4GB RAM (thank goodness for Apple’s Education pricing…), and I’m really thrilled with it.

It is a ridiculously sleek bit of kit, and so light that I have to double check my rucksack in the morning to make sure that I’ve actually put it in the bag. The thin, tapered edges add a bit of visual sleight-of-hand which makes it seem even smaller and lighter than it actually is. Nevertheless, the keyboard is full size (apart from the function keys), and the screen aspect ratio, together with the resolution and brightness make it very comfortable to work on for long periods.

The biggest revelation has been the flash storage. If you can live with only 128GB (which I can easily as I don’t keep music or movies on the Air), the speed of the drive more than makes up for rather pathetic sounding CPU spec. The Air feels faster than a recent Intel iMac, which is a bit ridiculous. It boots, shuts down, sleeps and wakes much more quickly, and applications open before you’ve even noticed. It’s also eerily quiet, without the whirr of the hard drive spinning up, and so far I haven’t heard the fans come on.

In short, it’s a lovely little machine, and I think we’re going to be happy together. Oh, and Mr. Bsag is very pleased with his hand-me-down white MacBook too. As an aside, I would like to give the software engineers at Apple a great big kiss for producing Time Machine. I remember (back in the pre-Mac OS X days) when it was hours or even days of work to transfer files over from an old machine to a new one and set everything up (even if you had a recent, reliable backup). These days, with Time Machine, it’s a doddle. Even though the iMac failed unexpectedly, and we couldn’t boot it again, Mr. Bsag didn’t lose a single file. We just hooked the MacBook up to the Time Machine drive, told it what to transfer over, left it for an hour or so, and he was right back where he left off.

1 One of them apparently batted my glasses to the floor while I was out of the room. I walked into the office in the dark and promptly stepped on them. There was a sickeningly expensive crunching sound, and I realised I would have to get a new pair. ↑

2 I don't know the technical term, but I do know it gets everywhere. ↑