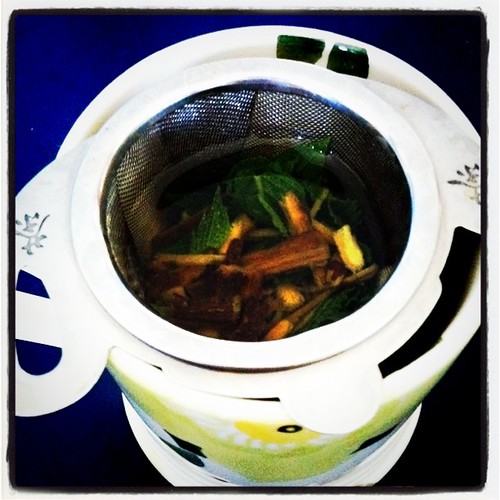 Like many a geek, I am an obsessive coffee drinker. I love good coffee, spend ages tinkering around with methods of making it, and find it genuinely hard to do without. I don’t feel quite the same about tea, but I do enjoy good tea, and like trying new varieties. For many years (and for reasons I can’t adequately justify), I’ve made do with tea bags, which is the equivalent of drinking instant coffee. They have generally been good quality tea bags, but it is still a fairly inferior product. The leaves in bags are usually small, broken and dusty, and the bags themselves don’t give the tea enough room to move around and infuse properly.

Mr. Bsag and I like different teas, so using a teapot (and a strainer) wouldn’t really work. Instead, we ordered a couple of cheap steel mesh baskets, which sit in a mug. They are large enough to let the tea infuse properly, and are easy to clean afterwards, as you can just knock the spent leaves out and then rinse the baskets through. We then set about ordering some good teas online. I browsed quite a few sites, but eventually settled on High Teas. They have an amazing range of teas and blends, including 11 different varieties of Earl Grey alone.

I’ve always like quite strongly flavoured teas, particularly Lapsang Souchong (very smoky, for those who haven’t tried it) and Earl Grey (perfumed with oil of bergamot). However, I’ll probably make those of you who are tea connoisseurs spit out your tea in disgust when I say that I like drinking both with milk. It’s something I haven’t been able to shake: I’ve drunk black coffee for years, but I just don’t like black tea without milk1. In the end we ordered five different teas, which were all excellent.

This was my favourite of the five: I’ve never had such a good Earl Grey. It looks beautiful, with deep blue cornflower petals scattered among the tea leaves, and smells absolutely divine. I know that Earl Grey divides people as it smells (and tastes) rather like Granny’s lavender bath salts. I happen to like the bath salts vibe though, and this tea is intensely perfumed with a complex, layered taste. It’s also deeply relaxing, like having a hot bath (with lavender bath salts, naturally) at the end of a hard day. Interestingly, Mr. Bsag — who has always hated Earl Grey — really enjoyed this tea.

This was for Mr. Bsag as he likes Assam brewed at ‘builder’s tea’ strengths. He wasn’t sure about this one at first, but after a bit of adjustment to the amount of leaves and the brewing time, he loves it now. It has a great, deep golden colour and a malty taste.

Again, Lapsang Souchong teas I’ve had before have been pale imitations of this glorious brew, which is bonfire night in a cup. It is deeply, resinously smoky, but not bitter or harsh. You have to brew it for just the right amount of time to get the full flavour out without over-brewing it, but it’s a real treat when you do. I can’t wait to drink this in autumn and winter, as the smokiness seems much more appropriate when it’s cold outside.

I’ve started drinking rooibos occasionally as a mid-morning drink recently, as I find it picks me up quite well without making me jittery. I hadn’t even heard of honeybush before, so decided to try it. It’s lovely, with a similar flavour to rooibos, but with a naturally sweet, honeyed taste (as the name suggests). It has quite small leaves, so you need a fine strainer or infuser or you end up with a lot of grounds in your cup.

I couldn’t find this on the site today, so they may have stopped stocking it. This was another one I tried out of curiosity, and because I like liquorice. The tea has shreds of liquorice bark, with small dried mint leaves, so it can be difficult to get a spoonful which contains a reasonable distribution of both as the mint drops to the bottom. The liquorice is amazingly sweet. I think if you wanted to stop taking sugar in your herbal tea, adding a bit of this would be a good way to do it. I actually found it a bit too sweet, and have taken to using our own fresh mint from the garden with a pinch of this tea to make a nice blend.

That lot will keep us going for quite a while, but when it runs out, I’m keen to try some of the other teas, particularly the Nilgiri and some of the Imperial Russian blends. However, you’ll still have to prise the coffee cup out of my cold, dead hands in the mornings…