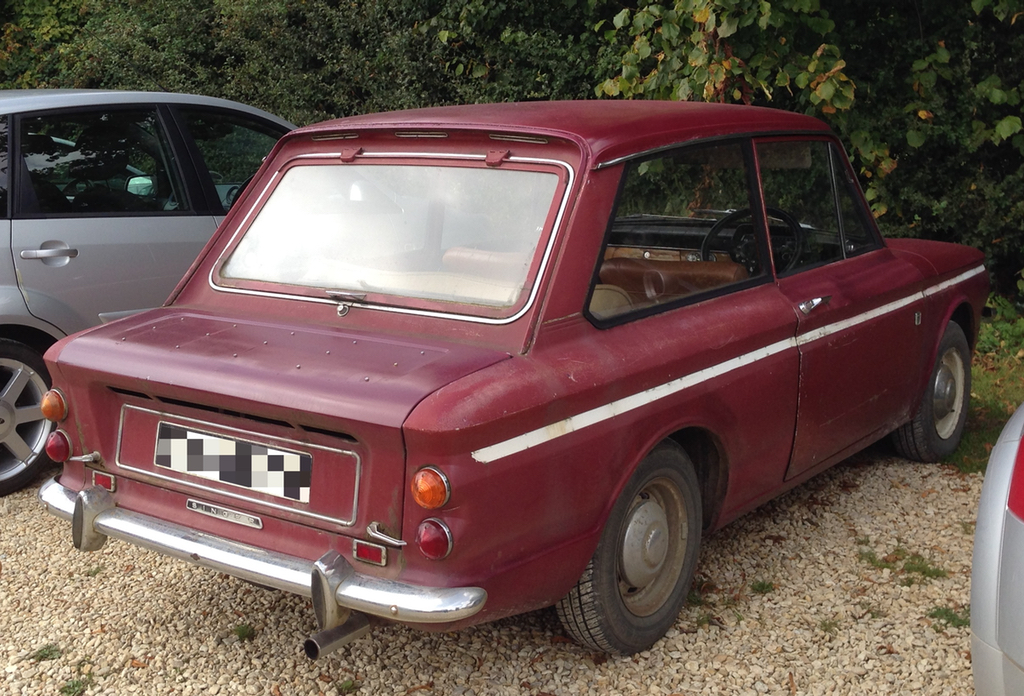 We were visiting Hidcote Gardens while on holiday, and I was practically squealing with delight as I spotted the car in the car park. I took a photograph, and had I not been too embarrassed, I would have given the little car a hug as well. I’m really not a car person. Cars are a mode of transport for me, and if they are functioning adequately, I pay them very little attention. So why was I getting so excited about an old and unremarkable car?

The first car I bought was a Hillman Imp. I had passed my test and had a little money saved, but not very much. I needed a cheap, reliable second-hand car. An advert for a Hillman Imp came up, and my Dad (who is an engineer and pretty knowledgeable about cars) thought it might make a good first car. And it was very cheap. For me, it was love at first sight.

Even if I hadn’t posted a photo here, I could describe an Imp to you very easily, because it is the most basic car shape imaginable. Picture a rectangular box with a trapezoidal box on top, and a wheel at each corner, and you have an Imp — none of this wind tunnel testing, or aerodynamic contours business. My best friend at school made me a cake in the shape of my car for my 18th birthday (without ever having seen it, or knowing what an Imp looked like), and it looked like a perfect scale model. My particular model was Caribbean Blue2 which was precisely the shade you might be imagining: a lovely turquoise blue. The interior was extremely basic, with black vinyl seats3 (sprung internally, so that you continued to bounce a few moments after going over a speed bump), a very minimalist dashboard, and a comically large, thin steering wheel that looked as if it had been borrowed from a Routemaster bus. When I bought it, my Imp was about 13 years old, and had been retrofitted with seatbelts. I called her Nellie, because she was an ‘N’ registration.

It’s hard for me to separate my love for Nellie as a quirky car from the freedom she gave me. Suddenly, I was able to decide to go somewhere, just get in the car and go — maybe even as far as Godalming4 She took me off to part-time jobs, to visit friends, and later to Bristol and back when I went to University. However, quite aside from the freedom, I genuinely loved her quirky charm. Imps are rear-engined and very low to the ground, which made you feel as if you were going about 50% faster than your actual speed (which was about 60 mph, tops). Country lanes were always great fun, with the rear engine pushing you through the bends, and the engine sound echoing off the hedges. The Imp sounded like a small sports car crossed with a sewing machine. It was also fun because it was — even by that point, and certainly now — a relatively rare car with an enthusiastic following. If you spotted another Imp while you were driving, there would be a fiesta of honking and thumbs-ups out the window. I once spotted another Imp descending the other side of a long hill into a valley. The driver spotted me too, we passed in the dip, grinning from ear to ear, beeping furiously and waving out of the window. Goodness knows what other drivers thought.

Nellie did have a few negative quirks though. She had a manual choke, which was a bit of a challenge. Manual chokes were becoming uncommon in cars back then, but most others I had seen placed the choke on the dashboard where you could easily adjust it. In the Imp, it was on the floor of the car, just in front of the gear stick. This meant (given how low the seats were placed), that you practically had to duck down below the windscreen to adjust the choke, and choose the moment carefully. Aside from the awkwardly placed choke, there were two other driving habits you had to adopt to adapt to her quirks:

Despite these quirks, she was actually quite a reliable car. I did have trouble starting her a few times in cold weather, but generally she ran well and got me where I needed to go. Apart from the overheating incident, I had only one breakdown in her (again, on the motorway). I was giving my brother a lift back from Bristol, and it was dark, so we obviously had the headlights on. Unbeknown to us, the alternator had failed, so at some point, the car just died, no power, nothing. Luckily, given Nellie’s impressive top speed, we were in the slow lane, and could coast in to the hard shoulder. As the alternator had failed, the battery wasn’t being recharged as we drove, so the headlights quickly dimmed and died too. This was not good. My brother scrabbled in his rucksack on the backseat to find his torch, and we pointed that rather lamely out of the back window, to try to avoid being shunted by other cars.

Before the headlights died, I tried to turn on the interior light so that we could see what we were doing. The light was activated by a rod that passed through the light housing and switched the light between off, on all the time and on only when the door was open. Rubber end caps stopped the bar from being pushed all the way out of the housing, but one of them had dropped off, and as I tried to activate the light, the entire bar shot through the housing and ricocheted off the window, to drop somewhere completely inaccessible. My brother and I looked at each other silently for a moment before bursting out laughing. It seemed fairly symptomatic of our mechanical luck that evening. The breakdown service eventually towed us to a garage in Reading, and we had to get my parents out of bed to pick us up from there. A couple of weeks later, the garage managed to track down the required part, and Nellie was back in working order again, though her interior light never worked again.

Eventually, Nellie went the way of all old cars, to the great scrapyard in the sky. Her sills rusted badly, and the cost of the work required to fix them meant that my cheap little old car was a technical write-off. I was incredibly sad about that at the time, and that’s why seeing the Imp/Chamois in the car park brought back so many memories. I’ve had several much more functional cars since Nellie, but none of them has made me as happy as that daft little turquoise car.