For me, this week has mostly been about marking exams and getting to know the cats. I'm sure it will be pretty obvious to everyone which one was more entertaining. Don't worry, this blog won't turn into an 'All Cats All The Time' enterprise, but I wanted to write a bit more about Bella and Bianca, now that we've got to know them a bit better. 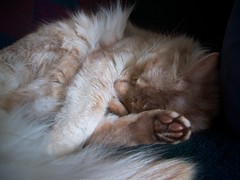 Bianca has a rather lovely dual personality. Most of the time, she is ultra-laid back, a kind of feline version of the Cadbury's Caramel bunny. She sleeps or stretches languidly, looking at you with half-closed golden eyes and a 'hey, take it easy' expression. Her fur is even cream and caramel coloured. Then, at various intervals (not coincidentally, often around food time) she has her Crazy Time and roars around like a kitten, skidding on the laminate flooring as she races about, wide-eyed. In either mode, she's very cute and very good natured, taking opportunities to snuggle up on laps or in convenient gaps on the sofa between the human occupants. She's slightly subordinate to Bella (and a year younger), so while Bella grooms her forehead affectionately and licks the inside of her ears (she has very clean ears), she also gets put in her place by a gentle cuff with a paw from time to time. 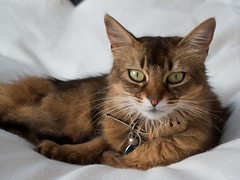 Bella is the kind of 'wild type' colour for Somalis, which is called -- oddly enough -- Usual (Bianca is Sorrel Silver, and Cleo was Blue). Despite the fact that it's not UN-usual, I love the colour and think it's very striking. She has stunning, big green eyes rimmed with black and the longest whiskers I've ever seen on a domestic cat. I'm sceptical about the myth that cat's whiskers grow to the width of their body, but if that is true, Bella has the whiskers of a much larger cat. She does like her food a lot, so perhaps she's planning on becoming a larger cat, and has grown her whiskers in anticipation. Either way, head on she has the look of a high-wire walker holding a long balance pole. It's rather a daredevil look. Bella is always alert to sounds outside, and when we first had her, would dive under the sofa bed in the office whenever she got spooked by a loud car or a dog barking outside (her former home was in a very quiet cul-de-sac). She's got a bit more used to the noises now, and is much more confident.

In fact, the very first thing she did after we let both of them out of their carrying boxes in the kitchen was to squeeze through an impossibly small gap beside the fridge and crawl underneath the kitchen cupboards. We had to pull the fridge and the washing machine out so that we could lie on the floor in the dust and call to her while holding out some food. She stayed there for quite a while, purring loudly, which -- as the cupboards acted as a natural resonator -- filled the kitchen with sound. Eventually, she came out and we blocked the gap up to stop her disappearing under there again. As I said, she's got used to her new surroundings now, and seems very comfortable in her own alert way. Certainly, she also loves curling up in our laps whenever she gets the opportunity, and adores her chin being stroked.

I've never had two cats at the same time, and it's fascinating watching how they interact. They don't curl up together like some cats do, but they are very friendly with each other, and also play chasing games together with toy mice or balls. They have different pitched voices, so we can usually tell who is calling even when we can't see them. Cleo was a reluctant feeder, so it's quite a shock to have cats who are so keen on eating. Mealtimes are delightful chaos, with both of them trying to climb up our legs while their food is being shared out, then there's a furry scrum until they work out that -- just like the last time -- there are in fact two bowls, so they don't have to fight over one.

Somalis are a lovely breed, and definitely people cats. They don't demand human attention all the time like Siamese cats, but they will happily follow you around and settle down wherever you happen to be, watching what you are doing or just hanging out. When I was weeding in the garden yesterday, I had two cats supervising my work through the patio doors the whole time. They're great, and we love sharing our lives with them. I also can't stop taking pictures of them, so you can see another shot of Bella and Bianca on flickr.